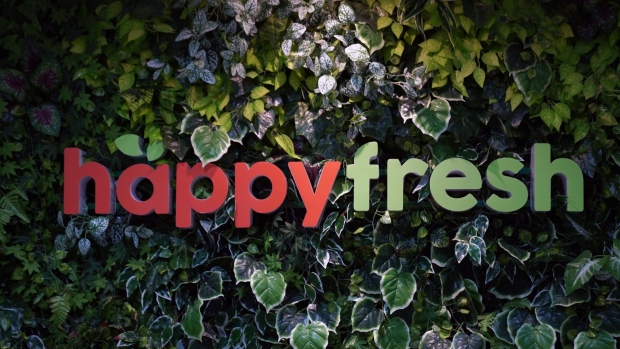 Signage for ICart Group Indonesia PT's HappyFresh is displayed on a wall in Jakarta, Indonesia, on Friday, July 12, 2019. Southeast Asia’s internet economy is on track to exceed $100 billion this year before tripling by 2025, becoming one of the world’s fastest-growing arenas for online commerce thanks to a youthful population increasingly comfortable with smartphones. Photographer: Dimas Ardian/Bloomberg , Bloomberg

(Bloomberg) -- HappyFresh has shut down operations in Malaysia and Thailand after struggling in those countries, leaving the embattled grocery delivery startup to focus on its main Indonesian market.

The Instacart-style delivery service said it was left with no choice but to cease operations in the two markets, according to posts on its local Instagram accounts on Thursday. It will stop its grocery business effective immediately, just days after the startup said it secured fresh funding and resumed operations in Indonesia.

Jakarta-based HappyFresh, which struggled this year to raise capital after a sharp downturn in the young online grocery sector, is working with venture debt funds Genesis, Innoven and Mars on restructuring its business. Representatives of US firm Kroll replaced three former directors on its board as part of the effort.

Founded in 2014 as one of the first Instacart-style grocery delivery services in Southeast Asia, HappyFresh has raised at least $97 million in equity funding in addition to debt financing. Formally known as ICart Group Pte, the company’s business has faced challenges in the face of slowing economic growth, surging inflation and higher interest rates.