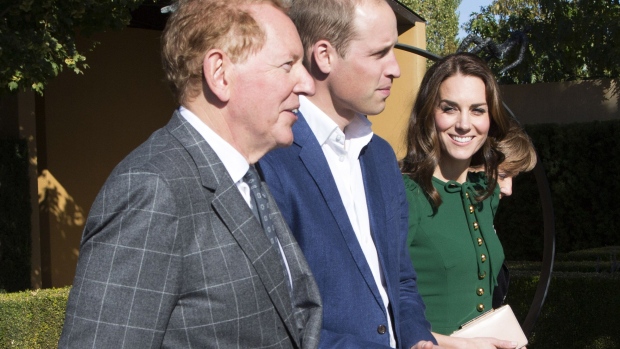 Fresh out of college in the early 1970s, Anthony von Mandl opened a wine-importing business in his native Vancouver. He struggled to get Canada’s liquor boards to buy the foreign labels he was handling.

He had “a little office about the size of a cupboard in the back of a building downtown,” said Vancouver-based wine writer John Schreiner. “He was selling German wines, primarily, out of his car.”

Those lean days are over. Von Mandl has since made a fortune creating genre-defying alcoholic beverages. His latest is White Claw, the “hard seltzer” that was the hit of the summer among millennials, outselling every craft beer and even heavyweights like Budweiser in the U.S. for stretches at a time.

It was the latest in a string of successes that includes Mike’s Hard Lemonade and has given von Mandl, 69, a net worth of about US$3.4 billion, according to the Bloomberg Billionaires Index. He has poured a good bit of that money back into his first love: wine. Last year, von Mandl bought his fifth winery in British Columbia’s Okanagan Valley, where he’s spent millions attracting star winemakers and producing award-winning Chardonnays and Pinot Noirs.

“He’s been astonishingly good for the industry here,” Schreiner said.

But the engine behind his company, Mark Anthony Group, is White Claw and Mike’s Hard Lemonade, a sweet alcoholic brew that became a phenomenon in Canada when it was first sold in 1996, sparking fights in liquor stores as supplies ran short. In 1999, Mike’s was introduced to the U.S. and sold 2 million cases the first year. It’s still popular two decades later, with U.S. sales of about US$1.6 billion, according to the company.

Mike’s success was recognizing that “25 per cent of guys didn’t particularly want to drink beer, but couldn’t be seen holding anything else in their hand,” von Mandl said in a 2006 interview. It was beer-like enough that you could bring it to a barbecue without feeling out of place.

In addition, Mike’s is brewed rather than being primarily spirit-based. As a result, it’s taxed at beer’s lower rate in the U.S. and can be sold in supermarkets and convenience stores in states like New York that restrict the sale of wines and spirits to specialty shops.

White Claw updated the concept for 2019’s more health-conscious drinkers by dropping the sweetness and calories. It has 5 per cent alcohol by volume, about the same as most beers.

Over the past 12 months, sales of hard seltzers almost tripled, even as Americans drank less alcohol for the third straight year. White Claw’s market share grew 11 percentage points from a year earlier, according to Nielsen data, and now hovers around 55 per cent.

“This summer Mark Anthony Brands became America’s fourth largest beer company,” Jamie Dammrich, a spokeswoman for the company, said in an email. “The U.S. business’ growth is 85 per cent this year and accelerating and is estimated to deliver close to US$4 billion in revenue in 2020.”

White Claw has benefited from a robust social media presence, with more than 100,000 tagged Instagram posts. A video made by comedian Trevor Wallace parodying White Claw drinkers has been viewed more than 3 million times on YouTube and spawned the meme “Ain’t no laws when you’re drinking Claws.” White Claw cans even made appearances as Halloween costumes.

The growth in hard seltzers is drawing the attention of market heavyweights. White Claw’s biggest competitor is Boston Beer Co.’s Truly, which has a 15 per cent market share. But Anheuser-Busch InBev SA, Molson Coors Brewing Co., Constellation Brands Inc. and Diageo Plc all have spiked seltzers in development or in stores.

Von Mandl remains bullish, telling a beer wholesalers convention in September that “the consumers flocking to White Claw today are not going to magically return to the mega-beer brands of yesterday.” His company is investing US$250 million in new U.S. production facilities to keep up with demand.

If history repeats itself, a lot of that money will find its way into the Okanagan Valley, where von Mandl owns more than 1,000 acres of vineyards. He bought his first winery -- Mission Hill Family Estate -- in 1981 when the valley was still a fledgling viticulture region known for producing wines of little distinction. After buying the run-down property, von Mandel wondered “if I had made the biggest mistake of my life,” he told an audience in 2003.

Mission Hill now produces wines that go for as much as US$250 a bottle, and hosted Prince William and Kate Middleton on their 2016 Commonwealth tour. After undergoing a six-year, multimillion renovation, the winery boasts an amphitheater, a Chagall tapestry and a 12-story tower with bells made by the French firm that crafted those in the Basilica of the Sacred Heart in Paris.

“To make a small fortune in the wine business,” he told the audience, “you have to start with a large one.”