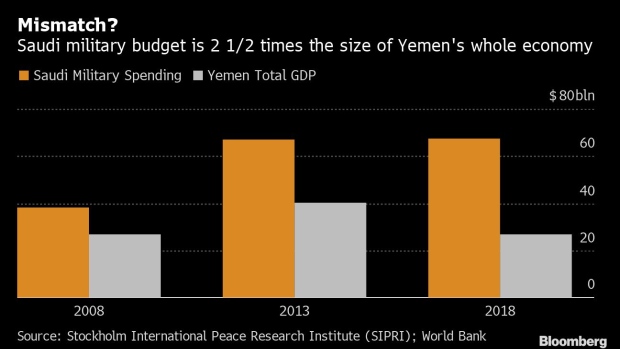 (Bloomberg) -- The Yemeni fighters could be heard in the video chanting “Death to America, Death to Israel” from a barren desert ridge after firing on a distant Saudi military vehicle.

Yet despite featuring a trio of rhetorical and battlefield enemies, the clip was really aimed at the Houthi rebel army’s own members. With Iran’s help, they’ve held off a vast military machine funded by Yemen’s rich Gulf neighbors for more than four years, and their commanders know the value of morale-boosting propaganda.

A flurry of recent developments, including Saudi Arabia’s reported agreement to a partial cease-fire in Yemen, are recognition that the Houthis remain an obstinate enemy that’s gaining in military sophistication.

Their claims to have carried out Sept. 14 drone and missile attacks on Saudi oil facilities were rejected by most observers, who concluded the sophisticated strikes were launched by Iran. But as the hottest frontline in the proxy tussle between the Middle East’s preeminent Sunni and Shiite Muslim powers, the war across Saudi Arabia’s southern border is posing an ever greater threat to the kingdom.

“The Iranians have never taken the Saudis seriously,” said Kamran Bokhari, founding director of the Center for Global Policy in Washington. “The war in Yemen only confirmed their view. The fact that Tehran engaged in this unprecedented attack speaks volumes of how weak it sees Riyadh.”

While many of their military claims are exaggerated, the Houthis have come a long way since the early months of the war, when Pat Lang, a retired senior U.S. intelligence officer, described them drinking “Red Label by the quart in the afternoon to come down from their Qat high,” adding: “They LOVE to fight.”

Missiles have been repeatedly fired into Saudi cities, reaching as far as the capital Riyadh, and since 2018 they’ve attacked using drones.

Their beginnings were more humble. Abdulmalik Al-Houthi, the group’s leader, studied the Koran in Saada, a mud-walled city of about 50,000 people high in the mountains of north Yemen, an hour’s drive from the Saudi border. He built a force that, according to one estimate, had about 10,000 fighters before the war.

The Houthis, who had long complained of their community’s marginalization, fought unsuccessful rebellions in the north from 2004 to 2010; they took Saudi territory in a three-month conflict starting in 2009 that killed about 100 Saudi soldiers.

Seeing an opportunity in the chaos that followed the Arab Spring uprising and the removal of President Ali Abdullah Saleh, the Houthis rejected a 2014 proposal to transform Yemen into a federation. In the plan, their northern strongholds had been included in a district with limited resources and no access to ports. Instead, having won the ousted Saleh to their side, the rebels marched on Yemen’s capital.

The Houthis, members of the Zaidi branch of Shiite Islam to which at least a third of Yemen’s population belongs, used frustration over an increase in fuel prices to extend their control over the city. An embittered Saleh helped them take over military bases and seize arsenals, though the group eventually turned on the former president, killing him during clashes in the capital in December 2017.

As they took over, President Abd Rabbuh Mansur Hadi fled to Oman and then Riyadh, prompting Saudi Arabia and the United Arab Emirates to enter the war to reinstate their ally -- and prevent the establishment of a Shiite-ruled state sympathetic to Iran on the Arabian peninsula.

Since 2015, the war in a country awash with guns has caused the death of thousands of civilians, displaced millions of hungry people and allowed a resurgence by al-Qaeda and Islamic State.

Despite the imbalance of wealth and weapons, the Houthis have held off the U.S.-backed forces of Saudi Arabia and the United Arab Emirates, two major military spenders. They still control Sana’a, territory along the Saudi border and the Red Sea city of Hodeidah, using slogans and folk music to boost the fighters’ zeal.

“They are militarily well-organized and have an ideology or dogma,” said Maysaa Shujaaeddin, an independent Yemeni researcher. “The Houthis have developed their fighting capacity throughout the war and got logistic and training support from Hezbollah and Iran.”

They’ve been aided by a splintering in their rivals’ ranks, with U.A.E.-assisted southern separatists in recent months fighting their nominal allies loyal to Hadi’s government.

The attacks on the Saudi oil facilities have now spurred efforts to end the conflict.

The Saudi cease-fire reported on Friday followed a visit to the region by U.S. Assistant Secretary of State for Near Eastern Affairs David Schenker, who said Washington was talking with the Houthis. The rebels had themselves declared a halt to drone and rocket strikes a week earlier.

The Wall Street Journal reported the Trump administration was trying to cajole Saudi Arabia into negotiations with rebel leaders, as concerns over a broader conflict with Iran grew. In a CBS interview Sunday, Saudi Crown Prince Mohammed bin Salman said he wanted a peaceful resolution, though Iranian involvement was complicating the task.

Building a peace process will require addressing regional and sectarian rifts that widened during the war. Thousands of militias must be disarmed, while the Houthis have to agree to share power.

In a sign of the challenges, Mohammed Ali Al-Houthi, a member of the ruling Political Council, said the group would accept nothing short of “a comprehensive stop” to Saudi “aggression” in return for its truce.

And at the weekend, the Houthis claimed without providing clinching evidence to have killed hundreds of troops in an attack on Saudi territory and taken thousands more captive.

Abdullah Al-Mikhlafi, a field commander with anti-Houthi forces in the southern city of Taiz, has witnessed first hand the rebels’ tenacity.

“We showered them with bullets and killed many of them,” he said by phone. “But they still continued their attacks.”

--With assistance from Daniel Flatley and Ben Holland.

To contact the reporters on this story: Mohammed Hatem in Dubai at mhatem1@bloomberg.net;Glen Carey in Washington at gcarey8@bloomberg.net