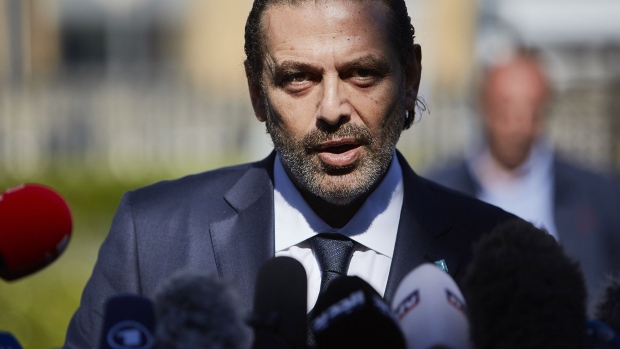 THE HAGUE, NETHERLANDS - AUGUST 18: Former Prime Minister Saad Hariri gives a statement to the press outside the Lebanon Tribunal on August 18, 2020 in The Hague, Netherlands. The Special Tribunal for Lebanon delivered a guilty verdict against one of four men on trial for the 2005 assassination of former Lebanese Prime Minister Rafik Hariri. Salim Ayyash was convicted on murder and terrorism charges, however the other three men were acquitted. All four were affiliated with the Shia militant group Hezbollah and had been on trial in absentia since 2014. (Photo by Pierre Crom/Getty Images) Photographer: Pierre Crom/Getty Images Europe , Photographer: Pierre Crom/Getty Images Europe

(Bloomberg) -- Saad Hariri, Lebanon’s former premier close to Saudi Arabia, said he won’t be a candidate to form a new government, a day after Prime Minister-designate Mustafa Adib stepped down.

Hariri, head of the Sunni-dominated Future bloc, said he supports the initiative by French President Emmanuel Macron and “facilitating anything that could make it succeed, because it is the only and last opportunity to stop the collapse of Lebanon,” according to a statement.

Adib stepped down on Saturday after failing to form a government, leaving the nation rudderless as it struggles to recover from a devastating explosion at its main port last month.