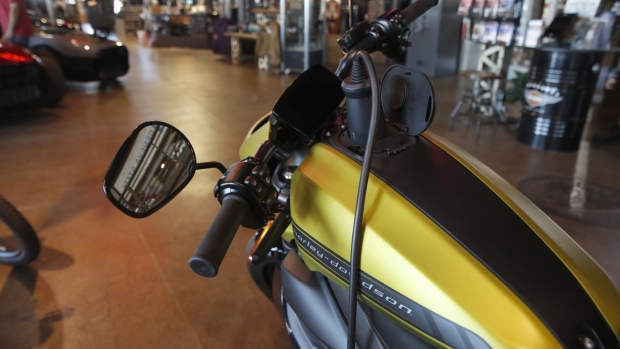 (Bloomberg) -- Jochen Zeitz, the chief executive officer of Harley-Davidson Inc., shrugged off the lackluster debut of the company’s electric motorcycle division via a blank-check merger, arguing it’s the right strategy for the 119-year-old manufacturer.

LiveWire Group Inc., the standalone electric motorcycle brand spun out of Harley-Davidson, raised $295 million on Sept. 27 after closing its merger with AEA-Bridges Impact Corp., a special purpose acquisition company. That’s far short of the $545 million anticipated when the deal was announced in December.

Zeitz, who will act as CEO of both companies for the time being, said the loss-making EV business has the cash needed to fund its business plan and it’s expected to turn a profit in 2026. Spinning off LiveWire was the right move to build credibility with EV enthusiasts, attract talent, and reach new customers, he said. Electrification of Harley-Davidson’s signature heavyweight motorcycles will come later, when battery technology has improved.

“I don’t build brands based on what the market does when you go public,” Zeitz said in an interview at Bloomberg’s New York offices. “I believe in the strategy of separating the brands” to bring about “strategic clarity” to operations, he added.

Shares of LiveWire fell 3.1% to $7.12 at 12:19 p.m. in New York. Harley-Davidson stock also fell. In the nine months since the deal was announced, investors have shied away from blank-check transactions and the broader market has declined amid runaway inflation and rising interest rates.

Zeitz brushed off the stock market declines. “I’m not a day trader.”

Harley-Davidson unveiled its first electric motorcycle in 2019, though sales were limited by its $30,000 price tag. Zeitz, who served as a board member for more than a decade before becoming CEO in 2020, said that bike confused consumers because it was sold under the Harley-Davidson brand, which is known for heavyweight cruisers with roaring V-twin gas engines.

Harley-Davidson discontinued that model and last year came out with the LiveWireOne, which sells for $22,799. The less expensive S2 Del Mar will go on sale next spring. LiveWire designed the electric powertrain and software to manage the battery in house, which will allow it to easily expand its line up. It has also partnered with Taiwan’s Kymco as a contract manufacturer that could help it expand in Asian markets.

Zeitz said battery costs, which have surged in the past year, are unpredictable and it’s unclear whether rising interest rates and a potential recession could dent growth plans for both LiveWire and Harley.

Harley-Davidson will retain a majority stake in LiveWire, and Zeitz didn’t rule out supporting it or raising more capital if profitability proves elusive. He will remain CEO of LiveWire for as long as two years, starting when the deal was announced in December. He said it’s worth the risks to be the first incumbent motorcycle maker to stand up an all-electric company.

“If you look at other motorcycle manufacturers they’re sort of dancing around the discussion, like a lot of autos danced around that discussion when Tesla was winning,” he said. “I’d rather take the lead and I think we have a unique opportunity, which is always more risky if you’re the first.”