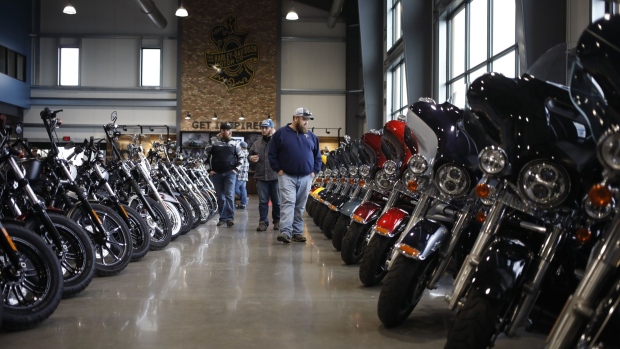 Customers walk past motorcycles at the Bluegrass Harley-Davidson dealership in Louisville, Kentucky, U.S., on Wednesday, Feb. 9, 2022. Harley-Davidson Inc. gained after reporting a surprise profit in the fourth quarter as strong demand in its home market and higher motorcycle prices padded earnings and shipping delays eased. , Bloomberg

(Bloomberg) -- Harley-Davidson Inc. plunged the most in 15 months after the motorcycle maker said it would halt almost all assembly and shipments for two weeks because of a “regulatory compliance matter” with a part from one of its suppliers.

The decision, made out of “an abundance of caution,” came after Harley received unspecified information from a supplier earlier this week, according to a statement Thursday. The interruption does not affect the company’s electric LiveWire bikes. The company declined to offer additional information or specify the supplier.

The work stoppage is a new stumble for Harley, which has already been grappling with chip shortages, high raw-material expenses and other supply-chain snags. Chief Executive Officer Jochen Zeitz, a former Puma SE executive who took the helm in 2020, has slashed costs, exited unprofitable markets and tightened inventory to raise motorcycle prices.

The decision places a burden on Harley dealers, who have already struggled to get inventory, said George Gatto, who owns two Harley stores in the Pittsburgh area.

“It’s peak season for this part of the country so this is the absolutely wrong time for this to happen,” he said in an interview. “We’re already not getting the vehicles we were promised, and now all of a sudden it’s worse.”