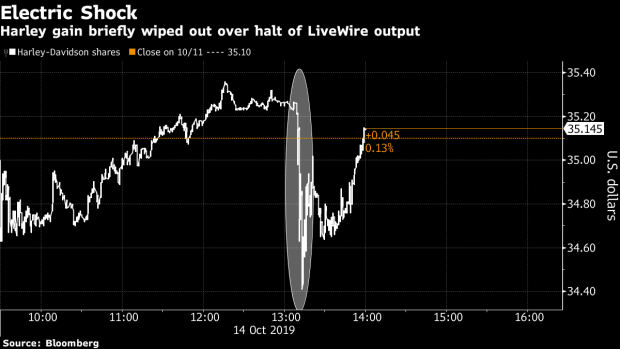 The motorcycle maker recently discovered an issue during final quality checks, according to an emailed statement that doesn’t provide details. Harley said it stopped production and deliveries as it conducts additional testing and analysis.

Harley shares reversed gains and plunged as much as 2% before trading little changed as of 2 p.m. New York time. The stock has risen about 3% this year, trailing the 18% gain by the S&P 500.

The Wall Street Journal reported earlier that Harley told some of its dealers last week it was suspending output as it conducted tests on the bike’s charging mechanism, citing a memo from Chief Operating Officer Michelle Kumbier. The company asked customers and dealers to only use a professional type of charger available at dealerships rather than home electrical outlets, the Journal said.

To contact the editors responsible for this story: Craig Trudell at ctrudell1@bloomberg.net, Kevin Miller