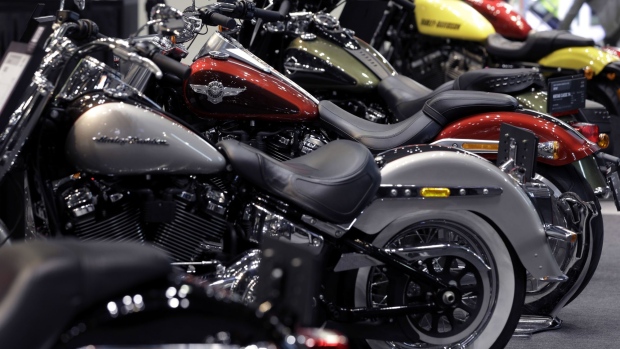 The stock rose as much as 17 per cent after the unveiling of a strategy dubbed “The Rewire,” which Morgan Stanley analyst Adam Jonas said could make Harley one of few manufacturers to grow profits in the coming years.

“It is clear to us that HOG will be less adventurous in terms of trying its hand at segments and markets where the brand faces extremely low chances of success with high up-front costs and high risks of brand atrophy that could threaten the company’s long-term survival,” Jonas, who rates the stock the equivalent of a buy, wrote in a report Tuesday.

Jochen Zeitz, a board member and former CEO of sporting-goods maker Puma SE, took over as acting CEO at the end of February. He’s dialing back his predecessor’s turnaround plan to focus on expanding U.S. ridership, iconic profitable bikes such as the Adventure Touring and Streetfighter models, and electric motorcycles. Those goals echo the demands of an activist investor, Impala Asset Management, that reached an agreement calling for Harley to add an independent director to its board later this year.

Harley “has become accustomed to over-committing and under-delivering; we need to set achievable plans and realistic goals,” Zeitz said during the earnings call. “It is clear that our strategy needs to be refocused to better align with our capacity and capabilities and also updated given our new reality.”

Harley shares were up about 12 per cent as of 11:53 a.m. in New York; the stock had plunged 49 per cent this year through Monday’s close.

Zeitz was mum on the subject of a permanent CEO search, batting away analyst questions by saying he’s focused on steering the iconic motorcycle maker through the crisis.

The fallout from the coronavirus was swift: U.S. sales had been up 6.6 per cent before the pandemic took hold in mid-March, but the drop during the first three months ended up being Harley’s biggest first-quarter fall since 2010. After that 16 per cent plunge in retail sales, Harley is in all likelihood headed for its sixth straight annual decline.

Zeitz resisted giving a new financial forecast, saying it’s too early to see the full scope of the virus’s impact. But he’s slashing costs and borrowing money to ensure Harley can weather the storm.

Harley announced it’s in talks with major U.S. banks to secure US$1.3 billion in funding and expects to tap capital markets for more in the coming weeks after sales of its motorcycles declined in every market worldwide, including a 13th consecutive quarterly drop in the U.S.

John Olin, Harley’s chief financial officer, said he’s tightening underwriting standards and increasing loan-loss provisions at the company’s lending arm. He stepped up provisions by US$36 million and wrote off US$8.9 million in credit losses in the quarter. Harley has been granting payment deferrals for some customers. 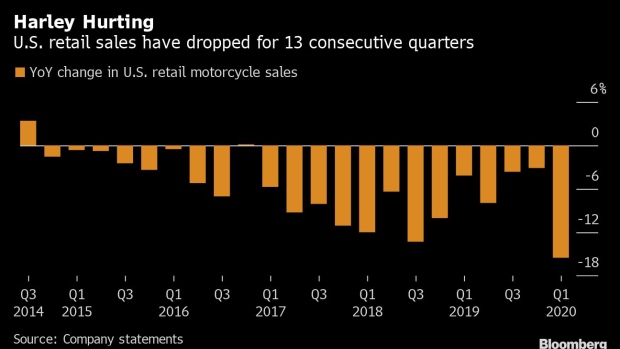