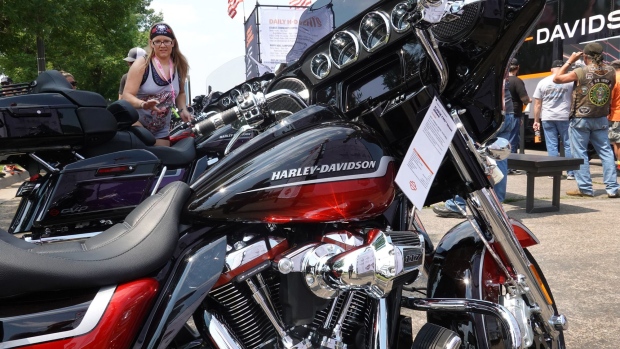 (Bloomberg) -- Harley-Davidson Inc. reported better-than-expected sales and profit in the third quarter as revenue in North America rose despite supply-chain bottlenecks that have limited motorcycle shipments.

Adjusted earnings rose to $1.18 a share from $1.05 in the year-earlier period, the Milwaukee-based company said in a statement Wednesday. Analysts had expected 80 cents a share, according to the average of estimates compiled by Bloomberg. Revenue from motorcycles and related products rose 20% to $1.16 billion.

Chief Executive Officer Jochen Zeitz, a former Puma SE executive who took the helm of the troubled manufacturer in February 2020, has slashed costs, culled dealerships and tightened inventory in order to raise prices. While he’s overseen the launch of successful new models like this year’s Pan America adventure bike, chip shortages, shipping delays and a trade spat with Europe are weighing on his plans for a turnaround.

Zeitz, a branding whiz who revived Puma in the late 1990s, served as a Harley board member for years before taking over as CEO. In February, he unveiled his “Hardwire” turnaround plan, which calls for investing $190 million to $250 million annually in part to develop Harley’s electrification technology.

The company is aiming for low double-digit growth in earnings per share and “mid single-digit” growth in motorcycle revenue through 2025, Zeitz said in February. Harley plans to achieve that by investing more in its core heavyweight-bike segment -- a category that has been shrinking across the industry -- and by turning its flagship electric motorcycle, LiveWire, into a standalone brand for electric bikes.