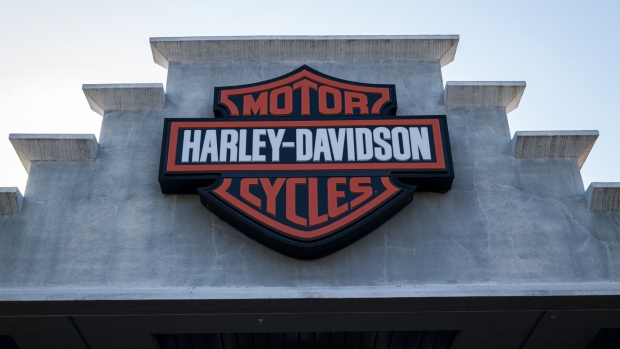 Harley-Davidson Inc. shares jumped by almost 30 per cent on better-than-expected profit as Chief Executive Officer Jochen Zeitz’s moves to cut costs and boost margins on a smaller revenue base paid off in the third quarter.

In line with Zeitz’s strategy of shrinking supply and shoring up pricing, the company said dealer inventory fell more than 30 per cent compared with a year ago, and it was able to charge asking price for 2020 model-year motorcycles in the U.S. during the quarter. The Milwaukee, Wisconsin-based manufacturer reported adjusted earnings per share of US$1.05, beating analysts’ consensus of 29 cents.

Zeitz, the former CEO of sneaker company Puma SE, has narrowed the motorcycle maker’s focus to core markets and model segments and scaled back ambitions for expansion overseas. Motorcycle sales in the U.S., Harley’s biggest market, logged a 15th consecutive quarterly decline -- falling 10 per cent. But that was better than the 27 per cent drop in the previous quarter.

“We have to focus not on volume but on desirability,” Zeitz said on an earnings call Tuesday. “We will not devalue our brand by oversupplying the market.” 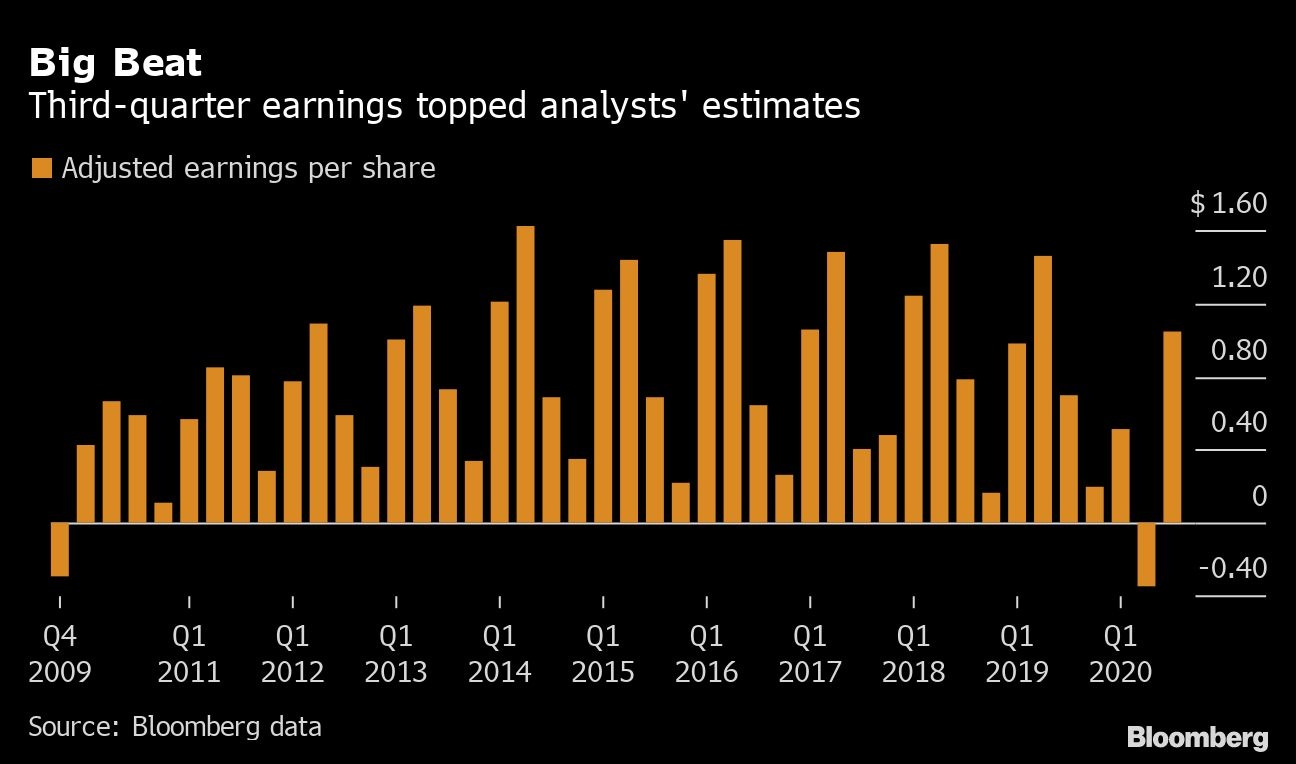 The company didn’t issue guidance for full-year earnings, citing uncertainty related to the pandemic. But Zeitz teased some of his future plans, saying there is “meaningful headroom” to add product in Harley’s core heavyweight-motorcycle category. He also played up the debut of its first adventure touring bike, the Pan America, due early next year.

Harley said it’s exiting 39 markets where weak volumes and profits don’t generate enough cash to support investment. It will focus on 50 key markets, and in 17 of those it will rely on outside distributors to sell bikes. The company plans to deliver its motorcycles in India through Hero MotoCorp Ltd. after announcing last month it’s pulling out of the country.

The motorcycle maker also said it plans to spin off its eBicycle business.

Zeitz is bringing in new talent to help carry out his transformation of the 117-year-old manufacturer. He replaced the company’s veteran chief financial officer with Gina Goetter, an executive from Tyson Foods Inc. who became Harley’s first female CFO last month. He also created the role of chief digital officer to revamp the bike maker’s online retail platforms.

Motorcycle and related products revenue fell 10 per cent from a year ago to US$964 million after Harley postponed its traditional August launch of new products until early 2021. But those sales still surpassed analysts’ consensus for US$843.7 million. 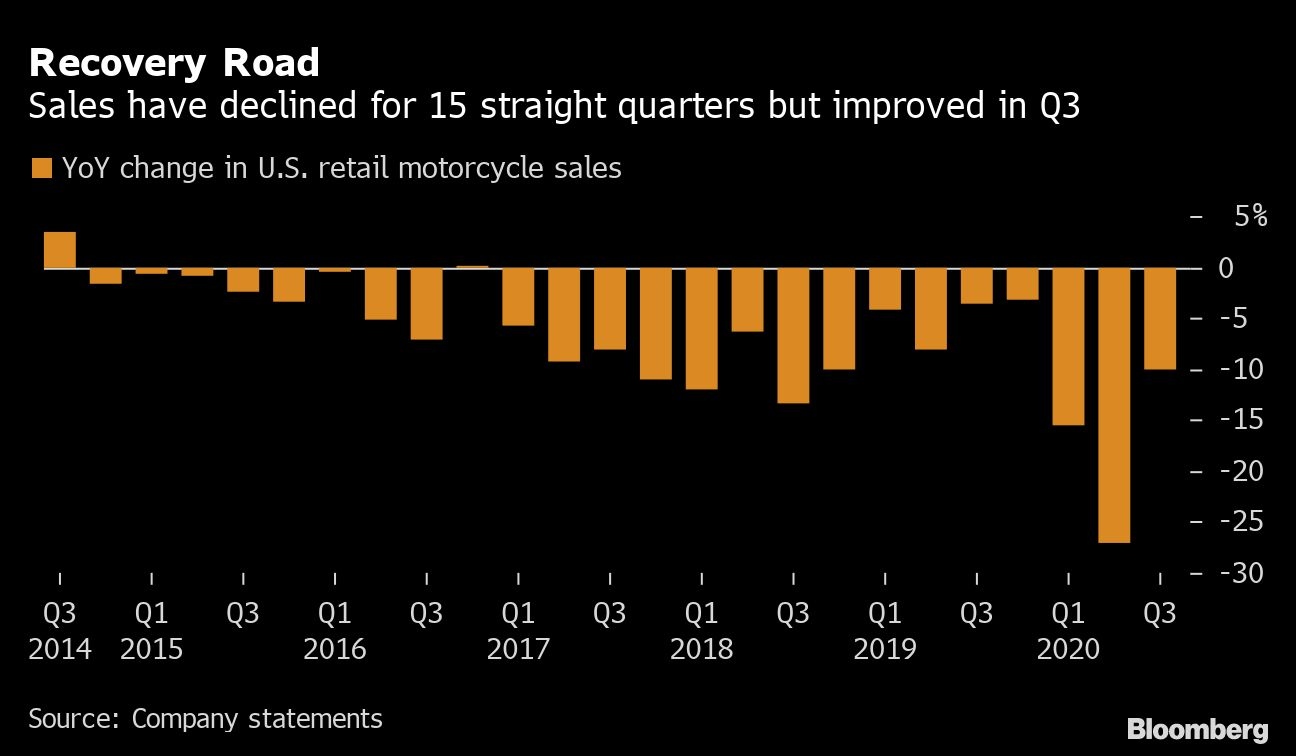 Harley-Davidson’s strategy to manage down motorcycle volume and reduce its global presence drove prices higher to MSRP in 3Q but basically concedes its purposely smaller scope and scale is the only way forward after several abandoned growth plans. The 30 per cent cut in inventory and exit from 39 markets -- due to weak volume and lack of profitability -- may never reverse, leaving Harley a more profitable, niche motorcycle maker by giving up on emerging markets as a driver of future growth.

The restructuring steps have starved dealers of new bikes to shrink inventory and improve pricing. Kevin Kodz, owner of Classic Harley-Davidson in Leesport, Pennsylvania, said he’s making about US$500 more per sale on new bikes.

“Because inventory is scarce, margins are through the roof,” Kodz said. “You’re doing very little discounting, deal matching, both new and used, there’s not product out in the market.”

Since taking over as acting CEO in February, Zeitz has announced plans to cut roughly 14 per ce of the workforce, prune its dealer network and delay product launches. He was officially appointed CEO in May.