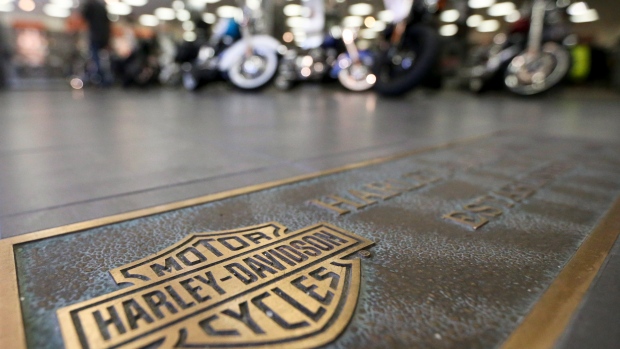 In this April 26, 2017, file photo, rows of motorcycles are behind a bronze plate with corporate information on the showroom floor at a Harley-Davidson dealership in Glenshaw, Pa. Harley-Davidson, facing rising costs from new tariffs, will begin shifting the production of motorcycles heading for Europe from the U.S. to factories overseas. , AP Photo/Keith Srakocic

Adjusted earnings fell to 70 cents US a share in the third quarter, the Milwaukee-based manufacturer said in a statement Tuesday, exceeding analysts’ average estimate for 67 cents. Harley shares climbed as much as 7.3 per cent in early trading.

-Harley trimmed capital-expenditure plans for the year to a range of US$205 million to US$225 million, dropping both ends of its forecast by US$20 million. The company is having to tighten its belt as demand in its home market has slumped for 11 consecutive quarters.

-U.S. retail sales fell 3.6 per cent, as the motorcycle maker continues to struggle to attract younger customers and cheaper used bikes erodes demand for new ones. But this was the smallest decline for the company since the fourth quarter of 2016. 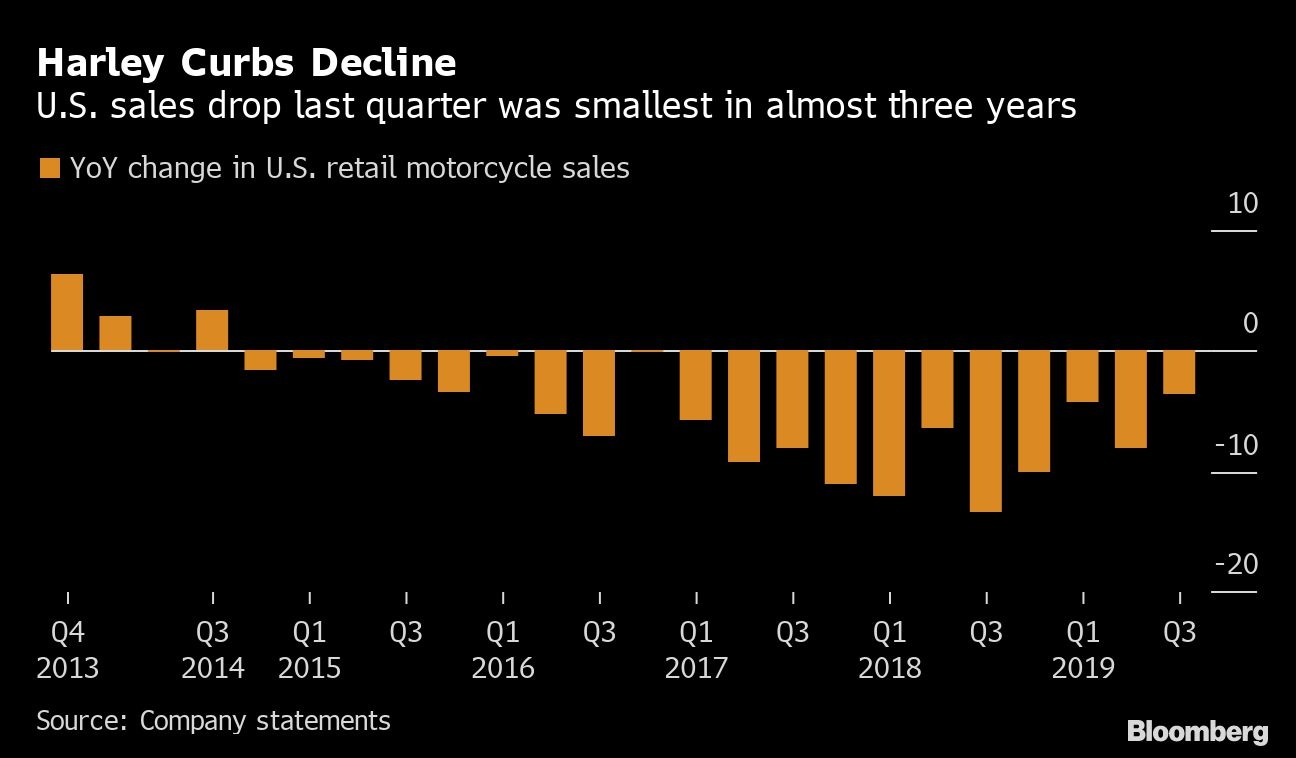 -CEO Matt Levatich backpedaled on long-term growth targets during an investor day in Milwaukee last month. He now wants to add 1 million new U.S. riders in the decade through 2027, down from two million. Still, RBC Capital Markets analyst Joe Spak questioned the feasibility of the less ambitious plan in a Sept. 24 report.

-Harley managed to temper sales declines in Europe, with a 0.6-per-cent dip in the last three months following the 12.5-per-cent plunge in the second quarter. Harley plans to ship bikes to the European market from an assembly plant in Thailand to sidestep EU tariffs on U.S. products.

-Harley is entering new, smaller bike segments to broaden its appeal globally and electrifying its lineup. While the company halted production of LiveWire — its first battery-powered bike — earlier this month to inspect a charging-related issue, it has resumed production.

-The EU last year imposed a 31-per-cent tax on U.S.-built motorcycles as retaliation for the Trump administration’s steel and aluminum levies. Harley won approval from European regulators to ship bikes from Thailand in order to circumvent that rate, but the company said has said the approval process took “considerably longer” than expected.