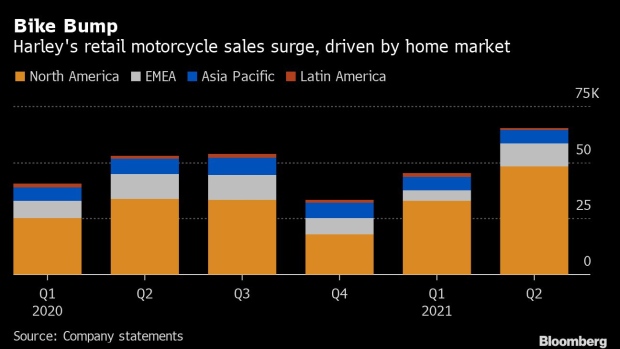 “We would have liked them to be higher but, due to the situation that is particularly supply-chain related that was impossible,” Zeitz said on a call with analysts Wednesday. “We don’t anticipate that happening in the second half either, because we’ve got to sell what we make.”

Motorcycle shipments have been held up in freight traffic, and the company has raised prices 2% on this year’s models to help offset rising aluminum and steel costs, and tariffs on its exports to Europe, executives said.

Zeitz, a former Puma SE executive who took the helm of the troubled manufacturer in February 2020, has slashed costs, trimmed Harley’s product portfolio, culled dealerships and tightened inventory in order to improve pricing. He’s plowing the savings into electrification and higher-end motorcycles. At the same time, he’s dealing with chip shortages, shipping delays and costly European tariffs -- the fallout from a trade dispute with the U.S. where Harley has become the whipping boy.

Second-quarter adjusted earnings were $1.41 a share, compared with a loss of 38 cents a year earlier, the Milwaukee-based company said Wednesday. Analysts expected profit of $1.26 a share for the latest quarter, according to the average of estimates compiled by Bloomberg.

While sales jumped 43% in North America, they fell in every other region, as Zeitz yanked unprofitable bikes from the lineup and shrank Harley’s global footprint. Deliveries dropped 7% in Europe, 31% in Latin America and 13% in Asia.

Investors are overlooking the 5% gain in deliveries over 2019 in the U.S., Harley’s biggest market, said James Hardiman, an analyst with Wedbush Securities. The successful launch this year of the off-road Pan America, which marked Harley’s entry into a new bike segment, is a positive sign for growth, he said.

Harley also unveiled two new bikes this month: the LiveWire One, a longer-range, lower-priced version of its $29,000 debut electric bike, and the Sportster S, a lightweight bike meant for short urban rides that starts at $14,999. At the same time, it has discontinued cheaper entry-level bikes.

“New products are the lifeblood of a company like this,” Hardiman said by phone. “We hope they can continue to come out with compelling new products which allow them to address not only their core customer but the outreach customer -- international customers, women, minorities -- that’s the goal here.”

Harley’s gross margin swelled to 30.6% from 16.1%, and revenue from parts and accessories increased 32%, a reflection of Zeitz’s strategy of cost-cutting while raising prices and strengthening the iconic brand.

Still, there is plenty of skepticism as to whether Zeitz’s turnaround plan, dubbed “Hardwire,” will improve the company’s long-term fortunes.

Joseph Spak, an analyst at RBC Capital Markets, said that Harley beat the bank’s estimate because of a lower provision for credit losses in its financing arm.

“We believe investors will look at this as more one-time in nature,” he wrote in a note to clients. “So, all in, some better results, but not as strong as the headline suggests.”

Zeitz, a branding whiz who revived Puma in the late 1990s, served as a Harley board member for years before taking over as CEO. In February, he unveiled his turnaround plan, which calls for investing $190 million to $250 million annually in part to develop Harley’s electrification technology, which lags behind Asian and European rivals.

He turned LiveWire into a stand-alone brand for electric bikes earlier this year and hired the company’s first “chief electric vehicle officer” in March, a former Bain & Co. consultant with extensive mergers-and-acquisitions experience.

Zeitz replaced Matt Levatich, a company veteran who stepped down in early 2020 amid slumping sales and pressure from activist investor Impala Asset Management.

(Updates with CEO and analyst comments)