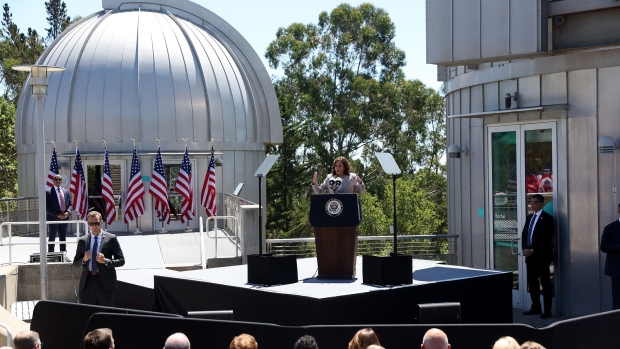 (Bloomberg) -- Vice President Kamala Harris pushed for the government to update the rules regulating the space industry and to foster stronger public-private partnerships, at an event highlighting new technologies developed by firms like SpaceX.

“Today, at laboratories, on launchpads and in orbit, often in partnership with our government, commercial space companies are making real the opportunity of space for millions of Americans,” Harris said at the Chabot Space and Science Center in Oakland. “Our government must deepen and strengthen our partnership with the private sector.”

Harris said that effort would require new rules to spur those partnerships. “We understand that we’ve got to update the rules,” she said. “They’re just simply outdated. They were written for a space industry of the last century.”

Harris and California Governor Gavin Newsom received a tour of the facility and heard from representatives from space companies about technological developments in the industry’s private sector. Officials from the Department of Commerce and Department of Transportation as well as Chairwoman Jessica Rosenworcel of the Federal Communications Commission joined.

Harris was tapped as chairwoman of the White House’s National Space Council, which will hold its second meeting on Sept. 9. Harris said the council will discuss ways to revamp the US regulatory framework to accommodate the advancements of the space industry’s private sector.

“We will do this work to make sure our nation remains a role model for the responsible use of space because we know we must keep pace with the tremendous rate of innovation,” Harris said.