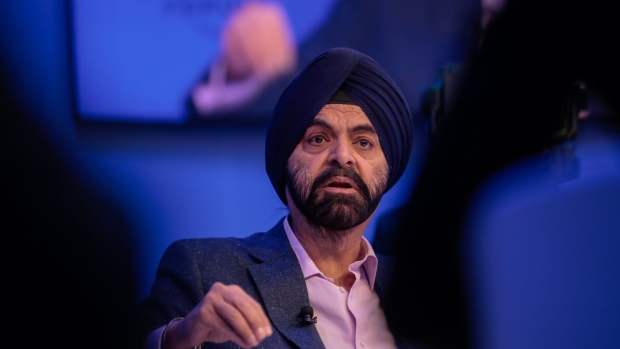 (Bloomberg) -- Vice President Kamala Harris has increasingly turned to corporate executives from Wall Street and Silicon Valley to serve as informal advisers, policy allies and political boosters as she grapples with a sprawling and at times intractable policy portfolio.

Discussions with one group of corporate leaders cleared the way for what Harris calls one of her biggest first-year triumphs: $1.2 billion in corporate commitments to help address the surge of migration from Central America. Talks with Wall Street executives also resulted in a successful push to get banks to distribute more pandemic funds to small and minority-owned businesses.

And corporate leaders say the vice president is continuing to engage them on other challenges, from the resurgence of the coronavirus to supply chain constraints and semiconductor shortages.

Harris’s relationships with the leaders have become crucial as she seeks to carve out her role in the White House and turn attention away from media coverage highlighting gaffes, misstatements and discontent among her staff.

The corporate world has provided a familiar source of help. As California’s attorney general, Harris gained a reputation for frequently partnering with technology companies -- rather than prosecuting them -- as she sought to address thorny policy issues.

Corporate leaders who have worked with Harris -- along with multiple White House aides who requested anonymity to discuss internal operations of the vice president’s office -- say the engagement has offered opportunities for the vice president to make an impact on issues she cares about.

It’s a strategy that carries some risk.

Close ties to the leaders of the nation’s biggest corporations could alienate the Democratic voters already unhappy with her over her career as a prosecutor before being elected to the Senate in 2016. And corporate leaders have used the conversations to push Harris on their own priorities, lobbying against changes to the tax code or for legislation that could prove a boon to their companies. That could prove problematic if she once again seeks her party’s nomination for president.

The discussions also haven’t yet yielded tangible progress on other key issues President Joe Biden put on her plate. While Harris has repeatedly asked corporate leaders to help her push for a federal voting rights law -- including just weeks ago during a meeting at the Treasury Department -- the legislation remains mired on Capitol Hill.

In other instances, such as when Biden assigned his vice president the task of addressing a surge of undocumented migrants amassing at the southern border, her team says the talks paid off.

“The vice president has worked closely with business leaders across a range of issues -- and throughout her career she has viewed the business community as an important partner when it comes to getting things done, with speed and impact in mind,” said Harris economic adviser Mike Pyle in a statement.

In a series of phone calls in the spring, Harris quizzed executives -- including Microsoft’s Smith, Chobani Inc. CEO Hamdi Ulukaya, and Mastercard Inc. Chairman Ajay Banga -- about what she could do to address poverty, climate change and corruption wreaking havoc on Guatemala, Honduras and El Salvador.

The corporate executives told Harris what they saw as some of the core issues driving the migration surge. But they also talked about unorthodox ways the federal government had been able to influence foreign policy crises in the past, from the Cold War through the Arab Spring, through the funding of nongovernmental organizations like the National Endowment for Democracy.

The corporate leaders agreed that their charitable contributions to the region would be more effective if they could work together.

“She latched on to that and kind of said, ‘That’s interesting. How many ideas can we come up with? How could a team of people get together?’” Banga said in a phone interview.

Harris gathered the executives, along with representatives of prominent charity organizations, in a conference room of the Old Executive Office Building offering a panoramic view of the National Mall. There, they agreed to start a new non-profit that would coordinate charitable efforts in the region.

The talks resulted in more than $1.2 billion in pledges to open new facilities, establish job training programs and expand Internet access across Central America. Already, more than 100,000 central Americans received technical and digital skills training from Microsoft, while Nespresso is for the first time sourcing coffee from farms in Hondouras and El Salvador.

It’s left to be seen whether the announcements eventually translate into a decrease in migration. Last summer, U.S. border agents handled the highest level of migrant encounters on the southern border in more than two decades. But Microsoft’s Smith, who has been part of efforts to funnel aid to the region for years, said the effort is working.

“I probably started out as somebody who was hopeful but skeptical that this could make a real dent, just because I think the magnitude of the challenge is so great,” Smith said in a phone interview. “But increasingly, I’m optimistic that this is gaining real momentum and will make a real difference.”

In other instances, Harris has leaned on corporate leaders she first met as a California politician.

Among them is Cisco’s Robbins. He said the two have remained in touch since Harris became vice president -- sometimes for a simple “sanity check” and on other occasions to talk through complex policy challenges.

Before her trip to Asia in August, Harris and Robbins spoke at length about the semiconductor shortage and supply chain challenges, conversations aides say informed her discussions with leaders in Singapore and Vietnam.

“We talked a lot about the specific capacity issues, the geographic consolidation of where the semiconductors are built,” Robbins said in a phone interview.

Harris also leveraged relationships with Wall Street executives early in the administration as she sought to improve access to pandemic relief loans for low income and minority borrowers, after the first tranche was largely distributed to wealthier businesses.

But, aides say, the conversations went beyond arm-twisting: Harris helped resolve issues between banks and the Small Business Administration to more quickly verify businesses that were identified as higher lending risks, helping speed the flow of pandemic assistance.

The effort appeared to work: The share of Covid-19 relief loans under the Paycheck Protection Program given to businesses in low- and moderate-income areas increased around 60% from the previous year, according to a White House official. Average loan sizes also dropped, suggesting the federal bailouts were helping smaller businesses.

In Harris’s calls with Citigroup’s Fraser, a bond was formed over the two women’s status as trailblazers, White House aides said. Fraser, the first woman to lead a major Wall Street bank, was previously head of Citigroup Latin America and subsequently offered assistance in Harris’s effort to address migration

Smith, the Microsoft president, sees the vice president’s approach as “using her position to identify the companies that are prepared to lean in and do something substantial and bring us together.”