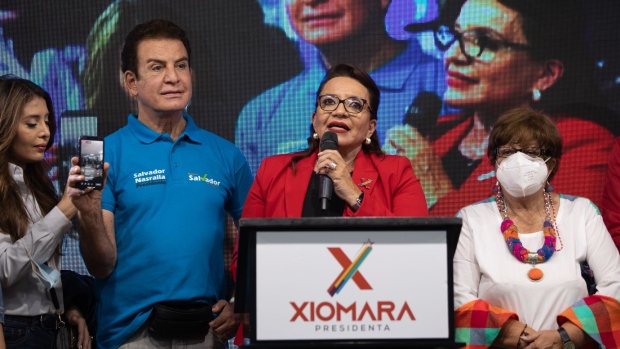 U.S. Vice President Kamala Harris receives a briefing on wildfire prevention and mitigation at the U.S. Forest Service Del Rosa Fire Station in San Bernardino, California, U.S., on Friday, Jan. 21, 2022. The Forest Service this week said it will target millions of acres of grasslands and forests for prescribed burns and thinning to fight escalating wildfire risk across the United States. , Bloomberg

But Harris’s trip Thursday to the inauguration of Honduran President Xiomara Castro, amid political turmoil in the country, risks underscoring the difficulty in delivering change to a region beset by corruption and chaos.

The White House hopes Castro can usher in a new era for the troubled Central American nation and a break from outgoing President Juan Orlando Hernandez, whom U.S. prosecutors have tied to drug smugglers, an allegation he denies.

Harris will attend the ceremonies and be the first world leader to meet with the new president following her inauguration.

But Castro’s effort to organize the country’s legislative leadership quickly descended into disarray, risking further political and economic tumult. After more than a dozen members of the incoming president’s Libre Party defected -- saying they would not support her preferred candidate for Congress president -- Castro was forced into eleventh-hour negotiations before taking office.

Those talks may have delivered a compromise that allows Castro to sidestep an impasse threatening to undermine the opening days of her administration. Yet the episode only served to illustrate the long odds Harris faces as she tries to stabilize economies and discourage migration in what’s known as the Northern Triangle of Central America.

“The relationship with the Biden administration should be leveraged in favor of a rigorous addressing of corruption, poverty and violence, and climate change impacts that are driving migration,” said Oscar Chacón, director of Alianza Americas, a network of migrant-led nonprofit organizations.

Harris is renewing her focus on migration after the administration’s push for voting rights legislation -- another high-profile issue in her portfolio -- faltered earlier this month on Capitol Hill. Additionally, a wave of end-of-year staff departures have drawn critical media coverage of her office.

For Harris, the challenge will be convincing a skeptical U.S. population that her diplomatic efforts to contain migration have succeeded. Law enforcement encounters at the southern border remain at record levels, with 178,840 apprehensions in December and more than 2 million over the past year, according to the U.S. Department of Homeland Security.

The vice president and her staff say her efforts will eventually yield results. Aides who briefed reporters before the trip on the condition of anonymity say Harris is proud of the headway she has made, but recognizes that it will take a committed effort over a sustained period.

Harris secured $1.2 billion in private commitments to promote economic opportunity in Central America, including a pledge from Microsoft Corp. to provide internet access to more than a million people in Honduras. Parkdale Mills Inc. has said it will open a new yarn-spinning factory in the country, while coffee companies including Nestle Nespresso SA and Peet’s have said they intend to increase financial support to farmers.

Tuesday at the White House, Harris said the administration’s strategy to combat human trafficking had resulted in the seizure of nearly 1,500 shipments of merchandise made using forced labor that can induce migration.

Harris has also created an anti-corruption task force directed at the region. Immigration experts say that if the pandemic subsides, conditions in the countries -- ravaged by the coronavirus -- may stabilize.

But President Joe Biden’s assignment of Harris to the politically divisive issue of illegal border crossings has left her in a precarious position, as polls show most Americans lack confidence in the administration’s immigration policies.

Honduras is one of three countries in the Northern Triangle, along with El Salvador and Guatemala, that are the source of most migrants intercepted at the U.S. border with Mexico over the last year.

And each country continues to pose political and economic challenges that may bedevil efforts to stem the flow of those traveling to the U.S. in search of better circumstances.

The crisis in Honduras - which seemed to undermine U.S. hopes that a new regime could sweep into office and confront challenges that include corruption, a struggling health care system, and endemic poverty -- illustrated the challenges facing Harris.

The defectors from Castro’s party put her mandate at risk by signaling they wouldn’t support Luis Redondo as Congress president. Redondo is allied with Salvador Nasralla -- Castro’s vice president. The defectors instead backed Jorge Cálix, a lawmaker with support from conservatives allied with the outgoing president.

The dispute erupted into a fistfight at the legislative headquarters and sent Honduras bonds to their lowest levels in 10 months. Castro has expelled the rebels from her party, while allies have claimed the defectors are opposed to the incoming president’s anti-corruption efforts.

Late Wednesday night, Castro said she had offered Cálix a job instead as cabinet coordinator in hopes of bridging the political divide. U.S. officials say that they are monitoring the situation in the legislature, but believe it is up to Honduran officials to come to a resolution.

Despite the turmoil, U.S. officials say Harris remains optimistic about Castro’s agenda. The incoming president has indicated she will invite the United Nations to establish a corruption-fighting body in the country and undertake new health and education programs.