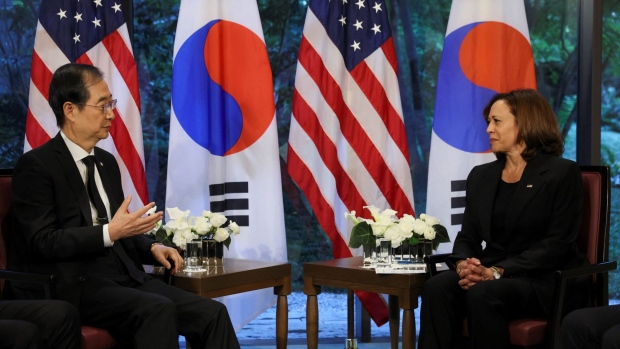 (Bloomberg) -- Vice President Kamala Harris is planning a trip to the Demilitarized Zone dividing the Republic of Korea and North Korea, in a high-stakes visit that comes as the US is confronting fresh provocations from Pyongyang while seeking to reassure regional allies concerned by deteriorating relations between Washington and Beijing.

The trip on Thursday will focus the world’s attention on the vice president, who has sought to burnish both US influence -- and her own foreign policy credentials -- with a trip through Asia emphasizing the Biden administration’s commitment to the region’s security.

Harris will become the first senior White House official to visit the DMZ during Biden’s tenure, and the visit comes as the White House has struggled to engage North Korean leader Kim Jong-un on talks over his country’s nuclear program, and as Pyongyang has launched a series of ballistic missile tests.

The trip will follow meetings in Tokyo, where Harris and allies -- including Japanese Prime Minister Fumio Kishida and Australian Prime Minister Anthony Albanese -- discussed the security situation in Taiwan. China has said it views the island as part of its territory that it plans to unify with the mainland, and has engaged in a series of military exercises in the Taiwan Strait.

The visit is a high-profile opportunity for Harris, who stumbled in her first year as vice president with controversies over her handling of immigration issues stemming from the Northern Triangle in Central America and a series of high-profile staffing departures. But she has assumed a larger role in the administration in recent months, serving as the face of the White House’s efforts to address a Supreme Court decision reversing abortion rights.

On Wednesday, Harris will meet with Japanese chief executive officers in the semiconductor industry for a discussion of the CHIPS and Science Act. The companies that will be represented include: Tokyo Electron, Nikon, Advantest, Shinetsu Kagaku (Shin-Etsu Chemical) and Fujitsu Ltd. among others.

In Asia, Harris’s trip will set the stage for President Joe Biden’s trip to the region later this autumn, where he’s expected to meet with Chinese President Xi Jinping and speak with allies about both efforts to denuclearize the Korean Peninsula and address the rising tensions over Taiwan.

“I think your visit to DMZ and Seoul will be very symbolic demonstrations of your strong commitments to the security and peace to Korean Peninsula and we are working with you and US in dealing with North Korea,” South Korea’s Prime Minister Han Duck-soo told Harris on Tuesday in Japan.

Harris is visiting the region to attend the state funeral of former Japanese Prime Minister Shinzo Abe, who was assassinated in July. Her trip to the DMZ was subsequently confirmed by a senior US official; Biden did not make the trip when he traveled to South Korea and Japan in May.

The US official said Harris’s trip was intended to honor the legacy of Abe, while re-affirming the existing alliances and economic ties within the region.

Harris was scheduled to spend just one day in Seoul, holding a bilateral meeting with South Korean President Yoon Suk Yeol to discuss the threat posed by North Korea as well as the importance of peace across the Taiwan Strait. Leading up to her visit, senior Biden officials deflected any questions about a potential DMZ visit.

(Adds meeting with CEOs on Wednesday in sixth paragraph)