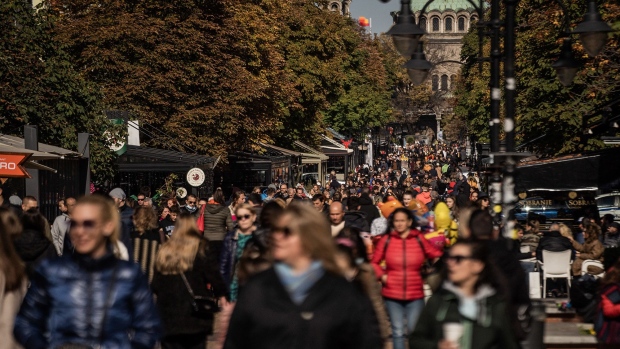 (Bloomberg) -- Two alumni of Harvard Business School are tackling a project that has confounded the attempts of everyone who’s tried to solve it: ending corruption in Bulgaria.

The task is formidable. The Balkan nation of 7 million has languished at the bottom of the European Union’s rankings in terms of living standards, has been kept out of the passport-free Schengen travel zone and has drawn repeated criticism for allowing endemic graft and organized crime undercut the economy.

Public anger over the lack of progress -- Bulgaria’s living standards remain at about half the EU average -- propelled the two businessmen-turned-politicians to the national stage earlier this year, where they leveraged their positions in an interim government to win support for a graft-fighting platform.

“We guarantee zero corruption in the next four years,” Petkov, at 41 years old his party’s candidate for prime minister, said as he launched talks with other political forces this week to form a coalition. “We’re all in this together.”

Nicknamed the “Harvard Boys” by Bulgarian media, Petkov and Vassilev met while they were completing their master’s degrees in business administration at the American university in 2007 and 2008, just as Bulgaria joined the EU.

Upon returning to their homeland, they co-founded a Harvard-affiliated center at Sofia University, where they teach courses on economics and entrepreneurship. They also -- separately -- owned and developed businesses including a line of probiotic foods and an airline booking platform.

After joining an interim government in April -- Petkov as economy minister and Vassilev heading the Finance Ministry -- they rose to prominence after saying they’d discovered programs that were unnecessarily draining cash from the budget under former Prime Minister Boyko Borissov.

They rode a wave of anger at Bulgaria’s traditional political forces that only grew after two inconclusive elections in April and July failed to produce viable governments.

Then as the country suffered one of the world’s deadliest outbreaks of Covid-19 while having the EU’s lowest vaccination rate, Continuing the Change narrowly beat Borissov’s Gerb party in a Nov. 10 vote, cementing its departure from the dominant position it held over Bulgarian politics for more than a decade.

Petkov and Vassilev are now holding coalition talks with three smaller parties and have pledged “zero tolerance” toward corruption. Their plan is to have a new majority-backed government in place by Christmas.

Obstacles remain. The negotiating parties have pledged to work together but have contrasting goals and in the past have vowed not to cooperate, lowering the odds that their alliance can last a full four-year term in power.

Petkov himself also has detractors: His opponents attacked him in his interim government role over his dual Bulgarian-Canadian citizenship, which the Constitutional Court said disqualified him from being a minister. Vassilev was accused of stealing intellectual property during conflicts with business partners years ago. He has denied wrongdoing.

Still, Petkov, whose casual style of open-collared shirts is reminiscent of politicians like Britain’s Tony Blair and Alexis Tsipras from Greece, said he was “very optimistic” about his chances to lead a government.

“We have one common goal and it is to gather the best team of experts in Bulgaria,” he told his potential coalition partners. “We are all one team that should make Bulgaria prosper.”