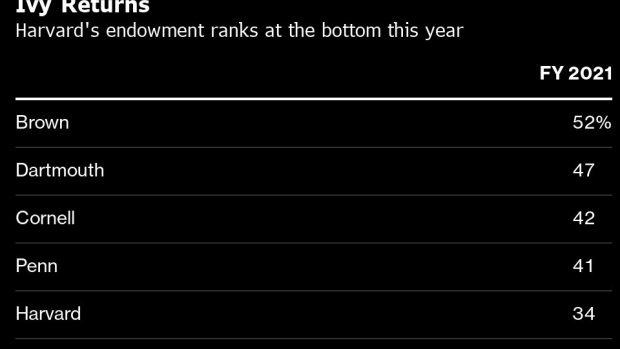 Pedestrians walk through Harvard Yard on the closed Harvard University campus in Cambridge, Massachusetts, U.S., on Monday, April 20, 2020. College financial aid offices are bracing for a spike in appeals from students finding that the aid packages they were offered for next year are no longer enough after the coronavirus pandemic cost their parents jobs or income. Photographer: Adam Glanzman/Bloomberg , Bloomberg

(Bloomberg) -- Harvard University reported returns that lagged behind its peers in the latest fiscal year, results the richest U.S. college attributed to taking less risk. The school’s endowment returned 34% through the end of June, Harvard said Thursday. That trails almost all the major universities that have reported results, many of whom credited stock holdings and venture capital investments for their success.

“Given the extraordinarily strong performance of the overall market this past year, a meaningfully higher level of portfolio risk would have increased Harvard Management Company’s returns dramatically,” N.P. “Narv” Narvekar, HMC’s chief executive officer, said in the statement.

Harvard’s risk profile “might well be different from that of other university endowments,” he said. “We believe that Harvard’s financial future is very well served by this process.” Harvard’s endowment still added $11 billion over the 12 months, and the fund’s value hit a record $53 billion. In fiscal year 2020, only about a dozen colleges in the country had assets of $11 billion or more.

Universities such as Vanderbilt, Duke and Washington University in St. Louis have all reported 60% or more performance for the year ended June, while Massachusetts Institute of Technology was up 56%. Among Harvard’s Ivy League rivals, Brown saw a 52% gain and Dartmouth reported a 47% return. The S&P 500 was up 38% over the period.

“While reducing public equities proved to be painful in financial year 2021, we needed to do so in order to remain within our portfolio risk budget,” Narvekar said.

Private equity, which comprises more than one-third of the portfolio, delivered a 77% gain. Stocks were up 50%, while hedge fund returns were just 16%. HMC has been reducing its stock holdings, which now comprise about one-seventh of its holdings.

Narvekar noted the success that other investors have had with venture capital, and pointed to moves his fund made that he said will pay off in future.

“Our recent venture investments could take about a decade to bear fruit, though up rounds are happening much quicker today than in normal market periods,” he said.

The endowment distributed more than $2 billion toward the university’s operating budget, which represents more than one-third of annual revenue. Harvard ended the year with an operating surplus of $283 million.