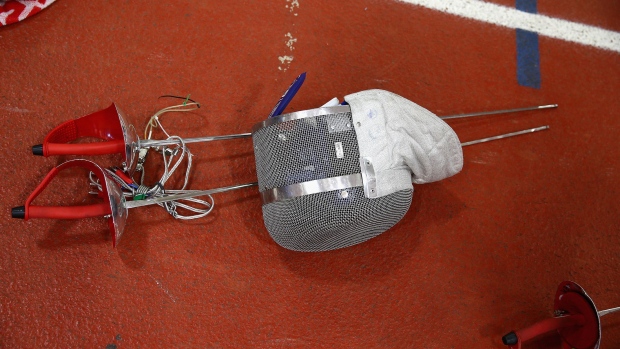 (Bloomberg) -- A Harvard University fencing coach demanded $7.5 million to help a Chinese telecommunications tycoon get his sons admitted to the prestigious US school, according to a fencing instructor who told a federal jury he was the middleman for the alleged bribery scheme.

Alexander Ryjik, a Virginia fencing instructor, testified he was originally supposed to funnel $1 million that Jie “Jack” Zhao had donated to Ryjik’s fencing charity into a new foundation created by Peter Brand, the coach of Harvard’s fencing program. But Brand raised his price in October of 2013 to $7.5 million, Ryjik claimed.

“I just want to confirm that the contributions total $7.5 million as we discussed this initially to make sure all of this is worth my while,” Brand said in a message to Ryjik shown to the jury on Tuesday.

Ryjik, 54, who is testifying under a grant of immunity, said he was shocked by Brand’s message. “I was scared,” the instructor told jurors. “He was getting very demanding, and he could blow up the whole deal and expose me to the board of directors.”

Ryjik is the government’s first witness in the bribery conspiracy trial of Zhao, 63, and Brand, 69, in Boston. The men are accused of defrauding Harvard by violating federal programs bribery laws in a case with echoes of the “Varsity Blues” scandal.

Brand and Zhao, chief executive officer of iTalk Global Communications Inc., claim they did nothing wrong and insist Zhao’s sons earned admission to Harvard on their own academic and athletic merits. Zhao’s lawyers also contend he has a history of being generous lending money to friends and say he didn’t befriend the coach until after his eldest son was already admitted.

Brand’s demand for $7.5 million was a familiar figure, according to Ryjik, who emigrated from the Soviet Union in 1990 and had trained Zhao’s sons since they were boys. Ryjik said Zhao once told him a Chinese friend donated that amount to the University of Pennsylvania’s fencing program and his children were admitted even though they were not top fencers.

Both of Zhao’s sons ultimately fenced and graduated from Harvard. Brand was fired for violating the university’s conflict of interest policies following a series of Boston Globe stories in 2019 detailing Zhao’s purchase of Brand’s home for hundreds of thousands over its assessed value.

The government claims Zhao ultimately paid Brand $1.5 million through a series of payments benefiting him, including the home purchase, a down payment on a condo, renovations, a Chevy Camaro, and Brand’s son’s tuition at Penn State.

Prosecutors have shown the jury text messages and emails involving the three men as well as photos of their worldwide travels together with all their sons, including trips to Moscow and the Olympics in Rio de Janeiro. All were paid for by Zhao, Ryjik said.

Ryjik said he almost signed an escrow agreement in 2013 with Zhao that would have paid out $1 million once the sons received letters of acceptance from Harvard. A friend who is an attorney told him he shouldn’t sign it, he said.

Defense attorneys contend Zhao’s sons were admitted based on their own merit as stellar scholars and athletes. Unlike some other elite colleges where coaches’ recruits are automatically admitted, an admissions committee at Harvard of about 40 ultimately decides who gets in.

The defense accuses Ryjik of lying to save himself following an FBI raid on his home. They say Ryjik initially denied knowing about a bribery scheme, but changed his story after investigators found he had used money from the National Fencing Foundation for his own expenses, including thousands in tuition payments to Harvard for his own son, who was a fencer.

Sparring with Zhao’s attorney on Wednesday, Ryjik repeatedly denied he stole from the foundation. He said he “misused” the funds and was paying the money back. He also said he gave incorrect information on an application for government loans and must pay back $150,000.

Ryjik’s charity eventually agreed to give $100,000 to help the Peter Brand Foundation get off the ground. The Brand Foundation’s planning papers said Brand’s wife would get $67,000 as president and his son would be paid $8,580 as secretary.

Zhao sought return of his donation to Ryjik’s charity, according to Ryjik. Ryjik did not return the money.

Neither Brand nor Zhao have any connection to the sprawling case dubbed “Operation Varsity Blues” by federal prosecutors in Boston, though that also involved wealthy parents allegedly paying to gain their children admission to elite colleges. That scheme, orchestrated by college counselor William “Rick” Singer, ensnared dozens of wealthy and celebrity parents — including actors Felicity Huffman and Lori Loughlin — who either paid conspirators to cheat on admissions tests or recruit their kids as athletes in sports they sometimes didn’t even play.