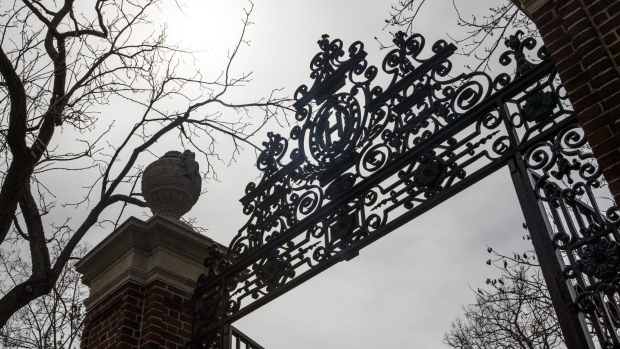 A gate stands in front of Harvard Yard on the closed Harvard University campus in Cambridge, Massachusetts, U.S., on Monday, April 20, 2020. College financial aid offices are bracing for a spike in appeals from students finding that the aid packages they were offered for next year are no longer enough after the coronavirus pandemic cost their parents jobs or income. Photographer: Adam Glanzman/Bloomberg , Bloomberg

(Bloomberg) -- N.P. “Narv” Narvekar, the head of Harvard University’s endowment, was paid $6.24 million in 2020, little-changed from the year before.

Narvekar received about $1 million in base salary, according to the school’s federal tax filing. He had about another $5.2 million in deferred compensation, Harvard said.

Since taking over in December 2016, Narvekar has revamped the endowment -- which at $53 billion is the largest in US higher education -- by unloading underperforming assets. He also changed the investment team’s compensation, tying it to long-term returns and overall portfolio returns.

The endowment’s performance has recently lagged behind peers. The fund gained 34% in the year through June 2021, a period when many colleges benefited from the surge in stocks. That ranked it seventh out of eight Ivy League schools. Harvard’s 10-year return of 9.2% is the lowest among the group.

Narvekar’s 2020 pay differs from what’s in Harvard’s tax filing because some of his payments are deferred and will appear in future years, according to the school.

In 2019, Narvekar, chief executive officer of Harvard Management Co., the entity that runs the endowment, had total compensation was $6.25 million.

The importance of college endowments has been underscored as the pandemic led to a financial crisis in US higher education. Universities lost revenue as they were forced to close and refund room and board fees. At the same time, schools incurred additional costs for Covid-19 testing and other social-distancing measures.