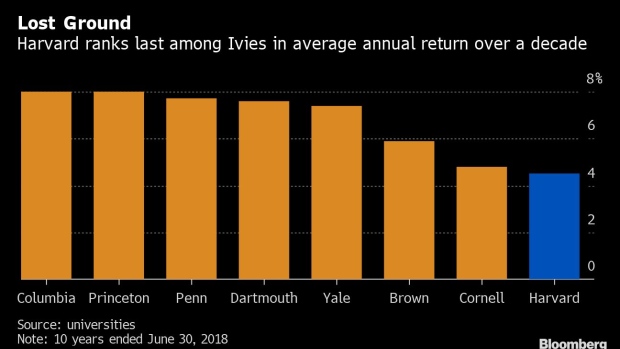 (Bloomberg) -- Colin Butterfield was frantic. The Harvard University endowment executive wanted to unload a disastrous $270 million investment in Brazilian farmland. But the school had no takers, and it was burning through millions of dollars.

“Why I’m freaking out is that we’re running out of money,” Butterfield said in a November 2017 conference call, referring to the project, not the college. “We have no more money.”

Harvard’s fear manifests itself in 2,000 pages of Brazilian court records, including this conference call’s transcript. The trove, reviewed by Bloomberg, is part of a lawsuit filed by the project’s former chief executive who claims that Harvard and its Brazil partner stiffed him out of millions in compensation.

The documents, many in Portuguese, offer a window into a debacle that has contributed to the lackluster performance of the world’s largest college endowment. Part of the reason: Harvard’s backfired bet on the most exotic of investments, direct holdings of agriculture in the developing world.

Auditors wrote down the value of the Brazil farm project by about $200 million after the endowment decided to exit the development in 2017, according to the lawsuit. Even for Harvard, which has a $39 billion endowment, that’s a steep sum, about as much as the Ivy League school spends annually on undergraduate financial aid.

The Brazil farmland failure underscores the hazards of Harvard’s approach, unusual apart from the wealthiest endowments. When these kinds of investments go sour, endowments can’t just put in a sell order and move on. “There appears to have been no exit strategy,” said Devlin Kuyek, a researcher at environmental activist group GRAIN who reviewed the case filings.

Under Harvard’s endowment chief N.P. “Narv” Narvekar, who was hired at the end of 2016, the school has tried to sell off a number of its natural resources holdings as part of its efforts to turn around the fund’s results. Over the decade that ended in June 2018, Harvard’s 4.5% average annual return ranked last among Ivy League schools.

Narvekar has replaced the endowment’s executive team in Boston and let go about 100 employees, downsizing its trading desk and spinning out teams of portfolio managers, as well as outsourcing almost all its capital to external money managers.The university declined to discuss the Brazil project, citing a policy of not commenting on specific investments. “Since arriving in late 2016, our current natural resources team has made great progress in the multi-year re-positioning of the legacy portfolio—identifying challenged assets to sell or liquidate and improving the management of others,’’ Patrick McKiernan, a spokesman for the endowment, said in a statement.

The school saw these bets as a way to diversify from the risks of conventional stocks and bonds and achieve better returns. But, in 2017, Harvard wrote down the value of its natural resource investments by more than a quarter, to $2.9 billion from $4 billion.

The Brazil project at the heart of the lawsuit was born in the country’s impoverished northeast. The university provided almost all the capital for the agricultural development; Brazilian private equity firm Gordian BioEnergy managed it, establishing a company called Terracal Alimentos e Bioenergia, according to people familiar with the matter.

Gordian planned to spend around 6 billion Brazilian reais ($1.5 billion) on agricultural developments, court records show. The first would transform thousands of acres around the remote town of Guadalupe on the Parnaiba River using modern irrigation technologies. It would process sugarcane into sugar and ethanol, grow tomatoes to make tomato paste and produce electricity from the waste.

At the time, Brazil was booming, but it has since slipped into an economic crisis. By the end of 2015, the endowment grew skeptical, canceling plans to invest another $350 million after an initial commitment of $270 million, documents show.

In May, Ricardo Moura, Terracal’s former chief executive officer, sued Harvard and Gordian in a state labor court in Rio de Janeiro, saying they owe him the equivalent of $8 million in profit sharing and bonuses.

It is one of at least three legal disputes Harvard faces from investments in Brazil. The other two involve allegations that some other farmland Harvard acquired has fraudulent titles, something the endowment has disputed. The farms are in a region known as the Cerrado, which like the Amazon to the north saw a surge in wildfires this year.

Officials from Gordian BioEnergy, which is based in Rio, didn’t return calls and emails seeking comment. Gordian was founded and is run by Diomedes Christodoulou, who earlier in his career helped spearhead Enron Corp.’s expansion in South America before the energy company collapsed in 2001.

Neither Harvard or Gordian has filed a formal response to the May suit over compensation, according to court records. A judge in the case issued a brief ruling in July, saying that the land in question can’t be sold without disclosing Moura’s claim to potential buyers.

Sorting out the mess left by the Brazil farm investment fell to 46-year-old Butterfield, who was hired in 2016 as a managing director overseeing Harvard’s natural resource portfolio. Before joining Harvard, he was CEO of Radar SA, a Brazil-based agriculture investor backed by retirement-fund giant TIAA.

The lawsuit captures the tension unfolding in 2017. Harvard pushed Gordian to sell off farmland piecemeal but the private firm wanted to find a new investor to keep the project alive.

Gordian hired five brokers that contacted almost 70 potential buyers for the land, from pension funds in Europe to money managers in Asia to blue-chip foundations in New York. They found little interest, according to the lawsuit. TIAA said it didn’t find the location of the land attractive, according to an internal report.

Records filed in court show Butterfield’s growing exasperation. He told Gordian’s Christodoulou there would be no “white knight” appearing to save the project and implored him to focus on selling what he could of the land.

“Everyone in the world knows about this project right now, and no one showed interest,” he said in the 2017 conference call.

Butterfield worried about cost overruns. These included a payment, worth about $70,000, to a woman who was pregnant at the time she was fired. The company was on pace to run out of money by mid-2018, according to a December 2017 email.

“I have 99% of this project,” Butterfield said on the call. “I don’t know what I’m going to do. So I am really losing sleep over this.”

To contact the authors of this story: Michael McDonald in Boston at mmcdonald10@bloomberg.netTatiana Freitas in Sao Paulo at tfreitas4@bloomberg.net

To contact the editor responsible for this story: David Gillen at dgillen3@bloomberg.net, John HechingerAlan Mirabella