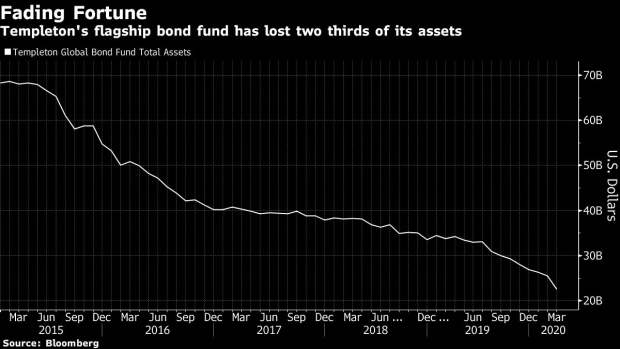 (Bloomberg) -- The main bond fund run by Franklin Templeton’s Michael Hasenstab posted a $4.3 billion decline in assets in the first three months of the year, its worst quarter since 2016.

Total net assets in the Templeton Global Bond Fund slumped to $22.6 billion as of March 31, public filings show, down from $26.9 billion at the end of 2019. It was the fourth consecutive quarter of declines and takes the drop in holdings in the past year to $11 billion.

Hasenstab has famously been caught on the wrong side of a huge bet against Treasuries and was forced to pare that back last year after yields plunged. Stimulus measures to fight the fallout from coronavirus have pushed yields even lower since.

The filings also show that average duration in the fund -- a measure of its sensitivity to interest rates -- has turned positive for the first time in three years, climbing to 2.06 years by the end of March. It hit a record low of minus 2.82 years at the middle of last year.

In a shift designed to offset loss-making positions, Hasenstab doubled exposure to the yen to more than 40% in the third quarter of last year and added long positions in the Norwegian krone and Swedish krona. The manager said then that he was holding onto his Treasury short, but turning the focus to longer maturities. The fund was betting against Treasuries by trading interest-rate swaps.

Hasenstab has argued for years that markets are overvaluing longer-maturity debt given rising deficit spending and inflation pressures. The fund was also heavily invested in Argentinian local-currency bonds when the country defaulted last August.

Once a top-performer with more than double current assets, Templeton’s flagship bond fund lost 7.4% in the past year, compared with a double-digit return for Treasuries.

A spokesman for Franklin Templeton didn’t immediately comment when contacted by Bloomberg.