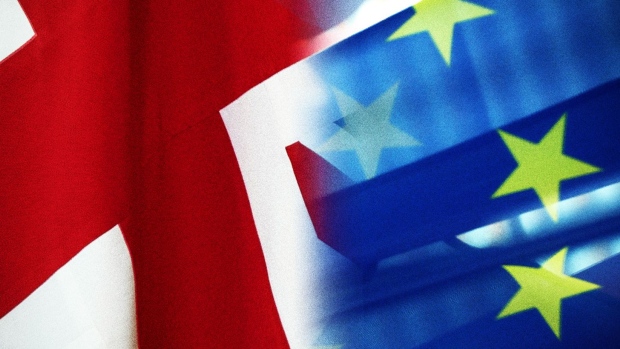 (Bloomberg Opinion) -- Opponents of a no-deal Brexit in the U.K. parliament continue to insist they can stop Prime Minister Boris Johnson from taking Britain out of the European Union without a deal. There is “no parliamentary majority for no deal” gets repeated like a mantra.

Brexiters say: So what? Parliament voted overwhelmingly in 2017 to trigger Article 50, which set the Brexit countdown clock in motion. Now supporters of a no-deal exit claim both the clock and the constitution are on their side.

They have a point. A look at the options being offered (I count seven) to delay or stop the no-deal train shows why Johnson’s threat has much greater credibility than Theresa May’s ever did.

Parliament could pass a law requiring the government to seek an extension. Back in April, the Labour MP Yvette Cooper sponsored a bill that placed a legal obligation on the government to, once Parliament approves, seek an extension of the Brexit deadline to avoid a no-deal exit. However, repeating that trick will be difficult, as Maddy Thimont Jack, a senior researcher at the Institute for Government, explains.

To pass that kind of law again (the Cooper Act no longer applies), those opposed to a no-deal Brexit would likely have to take over the “order paper,” which controls the parliamentary schedule, as they did earlier this year with the help of House Speaker John Bercow. Opponents of leaving without a deal will have to try to manufacture those opportunities, perhaps by amending an emergency debate motion. But it will be up to the speaker to decide whether to allow it. Even if such legislation were to pass the House of Commons, it could get held up in the House of Lords, where filibusters and other procedural obstacles could get in the way.

The bigger problem with this route is determining what comes afterward. EU leaders made clear that they would be willing to grant another extension, but that must be approved unanimously by the 27 other members and one or more (French President Emmanuel Macron, for example) could decide they want to attach conditions.

Parliament could pass a vote of no-confidence in the government. This is the scenario everyone has been talking about, but it’s far from an automatic brake.

A no-confidence vote (which Labour leader Jeremy Corbyn has signaled he’ll call when Parliament returns) can be held only after a motion is put forward, which means a vote would realistically be held only Sept. 4, the day after parliament returns. Given the law requires 25 working days before an election can be held, it would just be possible to fit in an election before exit day on Oct. 31.

Only what happens if Johnson refuses to go? If a no-confidence vote passes, the majority party would have 14 days to try to assemble a new government, which means he could simply declare a new election for the day after Brexit.

Some have advocated for a “national unity” government to be formed across party lines following a no-confidence vote. There are political obstacles there: Corbyn has ruled out any alternative government he doesn’t lead, and his leadership is a deal-breaker for the Liberal Democrats, who now have the ambition to at least replace Labour as the main opposition party if they can’t win an election. At any rate a national unity government in time to stop no-deal would still require the current prime minister to step down once he lost a confidence vote.

Even if a general election is somehow engineered to take place before Oct. 31, that is a roll of the dice at this point since a combination of the Brexit Party’s strength, Labour’s weakness, a resurgence of the Liberal Democrats and tactical voting could produce a hung parliament or other outcome that would delay the formation of a government and make it difficult to stop the clock.

Parliament could cancel the September recess. Lawmakers return in early September but leave again shortly after that for the party conferences season – a period in which the parties hold their annual meetings and rally behind the leader. There has been talk of Parliament suspending that recess in order to give MPs more time to come up with an anti-no-deal plan. Of course, buying a little time isn’t much of a plan unless any of the other scenarios work.

Parliament could repeal of the Fixed Term Parliament Act. This crucial bit of legislation, passed in 2011 to shore up the then-coalition government between the Conservatives and the Liberal Democrats, makes it harder to trigger new elections, something that helped drag out May’s doomed prime ministership, and which is helping her successor now. By repealing that act, Parliament could get a snap election triggered merely with a vote of no confidence, though that would eliminate the chance of forming a national unity government. Lawmakers may instead seek to shrink the campaign period down from 25 days (already an eye-blink compared to American presidential campaigns) in the hopes of getting an election in before the Brexit deadline, but there is nothing certain about how this gambit would play out.

The courts could intervene. Now we get deeper into the constitutional fog. Gina Miller, the lawyer and campaigner whose court challenge gave Parliament a bigger role in the Brexit process, has said she would challenge any attempt by Johnson to stay in place after a vote of no confidence or to try to set the date of the next election after Oct. 31. Her argument would be that a government that has just lost the confidence of Parliament cannot bind the hand of its successors in such a definitive way on such a historically momentous issue. The government would presumably counter that leaving the EU won a referendum and is already on the statute books. Constitutional experts differ on who is right and how this would play out.

The Queen could step in. This is the most unlikely of options from a monarch who remains strictly outside politics, apart from the occasional oblique appeal for “common sense.” Constitutional experts are divided on whether Queen Elizabeth II might force Johnson to resign if he lost a confidence vote but refused to leave. Labour Shadow Chancellor John McDonnell suggested last week his boss might demand it. Of course, it would be harder for her to remain neutral if it were clear that Parliament had an alternative government to put forward.

Parliament could revoke.  Many of those opposed to a no-deal Brexit are indeed committed Remainers who would happily cancel Brexit by revoking the decision to trigger Article 50. But many others – including Labour lawmakers from Leave-voting constituencies and many Conservatives who also pledged to follow through on the referendum result – are not. Revoking Article 50 would be electoral suicide for many of them. It’s hard to see anything short of a severe market reaction that would yield a majority for that option.

With a governing majority of one, an election fairly soon seems inevitable. If parliament somehow manages to block a no-deal Brexit or force another extension, Nigel Farage’s Brexit Party are still in the game and can divide the Conservative vote, forcing Johnson into an alliance it is trying to avoid. The Remain-leaning parties will either stay fragmented or, as they did recently in the Brecon and Radnorshire by-election, find a way to cooperate. Either way, the outcome is unpredictable. Johnson’s message (already being delivered relentlessly by ministers) will be that parliament thwarted the will of the people and so the only way to finish the job will be to give Johnson a governing majority.

If parliament is unable to stop the no-deal train, an election just after Brexit happens (but before the real pain of new trade frictions sets in) would enable Johnson to blame the EU for any havoc, claim he alone was able to deliver on the people’s wish and argue he should now be given a mandate to focus on crystallizing the promised opportunities of Brexit, including his big-spending pledges. Johnson will like his chances: The remain-supporting Liberal Democrats will be on the back foot since it's not clear what the party wants apart from staying in the EU, the Brexit Party will be left without a raison d’etre and Jeremy Corbyn’s Labour Party will share all the blame but none of the credit.

Will history later show that Remainers and those who wanted a deal blew their last chances to stop a no-deal Brexit while May was still in office? Lawmakers have a lot to think about during their summer recess.