Positive momentum for the economy but B.C. floods and Omicron may impact it: Former BoC economist

The Canadian dollar is closing out 2021 as the only major developed-market currency to advance against the dollar, and a hawkish central bank in Ottawa should support the loonie further in 2022.

Markets expect the Bank of Canada to be one of the G-10’s most aggressive monetary authorities in tightening policy next year. Traders are currently pricing in five 25-basis-point rate hikes in 2022. The BOC upped its hawkish rhetoric in the latter part of 2021, as inflationary pressures became a primary concern for Governor Tiff Macklem.

That pivot should continue to help the loonie, even against its cross-border counterpart, which it’s beaten for three straight years, according to Scotiabank’s Juan Manuel Herrera.

“While we see the BOC and Fed both hiking by 100bps next year, we think the BOC will hike at a faster pace through 2023,” he said. “So shorter-term rates will act as a solid support for the CAD.” 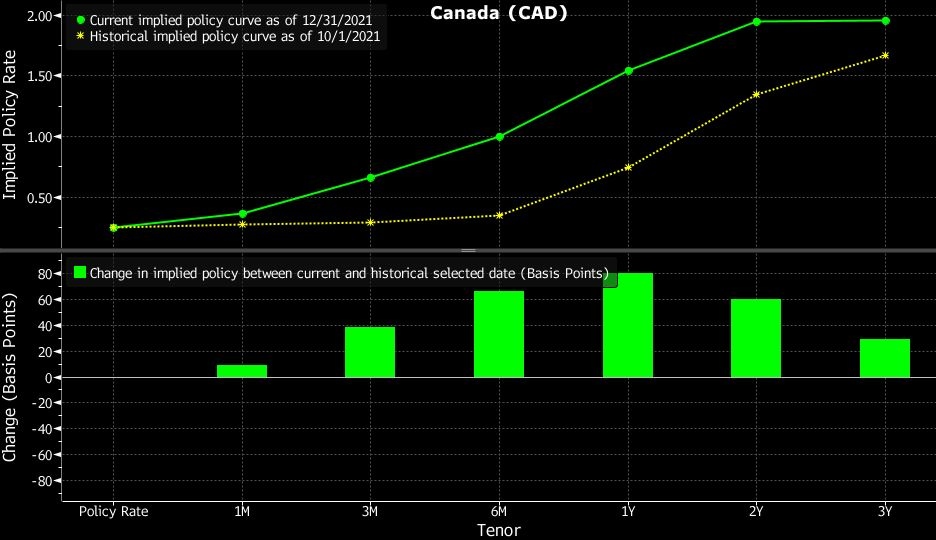 A New Year’s Eve rally helped push the Canadian dollar over the edge to first place in G-10 FX, making the loonie an outlier among its peers following a banner year for the greenback, which posted its largest yearly gain since 2015. On top of monetary policy, the loonie also found support in commodities, as crude oil prices had their best 12-month run since 2009.

Those dual tailwinds have pushed the currency to 1.2667 against the dollar, about 0.5 per cent stronger than where it closed 2021. Steven Englander, head of G-10 FX research at Standard Chartered, said the bank likes the loonie a lot heading into next year.

“We expect 1.15 by end 2022, driven by our view that the BOC is the G-7 central bank with the strongest commitment to normalizing monetary policy, supportive commodity prices and easing of COVID concerns,” he said in an email.