Idea of accelerating the taper is something market participants might not have been expecting: Strategist

Jerome Powell’s appetite for a faster tapering of Federal Reserve stimulus is casting him in a role financial markets haven’t seen since 2018: hawk.

Stocks slid, short-term interest rates rose and measures of equity volatility surged Tuesday after the central bank chairman warned that elevated inflation could justify ending asset purchases sooner than planned. Buffeted also by anxiety around the coronavirus, the S&P 500 just endured its worst stretch of turbulence in more than a year. 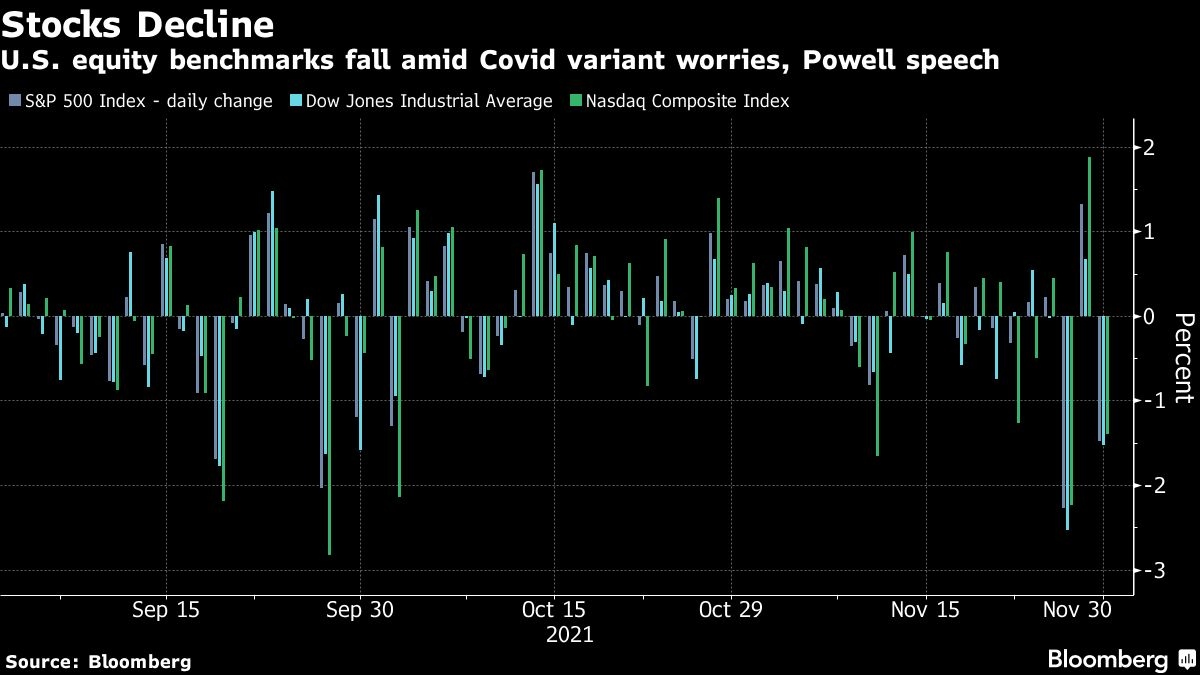 For investors, an urgent question becomes whether Tuesday’s congressional testimony was a watershed moment for the monetary policies that have helped the S&P 500 effectively to double since Christmas 2018. That’s when Powell’s last big pivot occurred -- the dismantling of interest-rate hikes that made the fourth quarter of that year one of the worst for equities ever.

“Not only is he speaking in a more hawkish tone, but he’s dropping major policy implications almost without regard to how the markets may take them,” said Max Gokhman, chief investment officer at AlphaTrAI. “All of the predictability he’s previously tried to cultivate in terms of taper and liftoff scheduling is in question.”

Missing from Powell’s script Tuesday was the sense of deliberation that has defined his message ever since transforming from hawk to dove at the end of 2018.

While it remains to be seen how radical a shift is at play now, the change in tone was unmistakable in markets that have heard virtually nothing but encouraging words from the Fed since 2018. Investors now find themselves potentially at the mercy of economic reports that have painted an increasingly bleak picture of inflation.

“Markets will be very reactive to the data, probably over-reactive,” said Michael Kantrowitz, head of portfolio strategy at Cornerstone Macro. “There is a lot of fog we need to get through.” 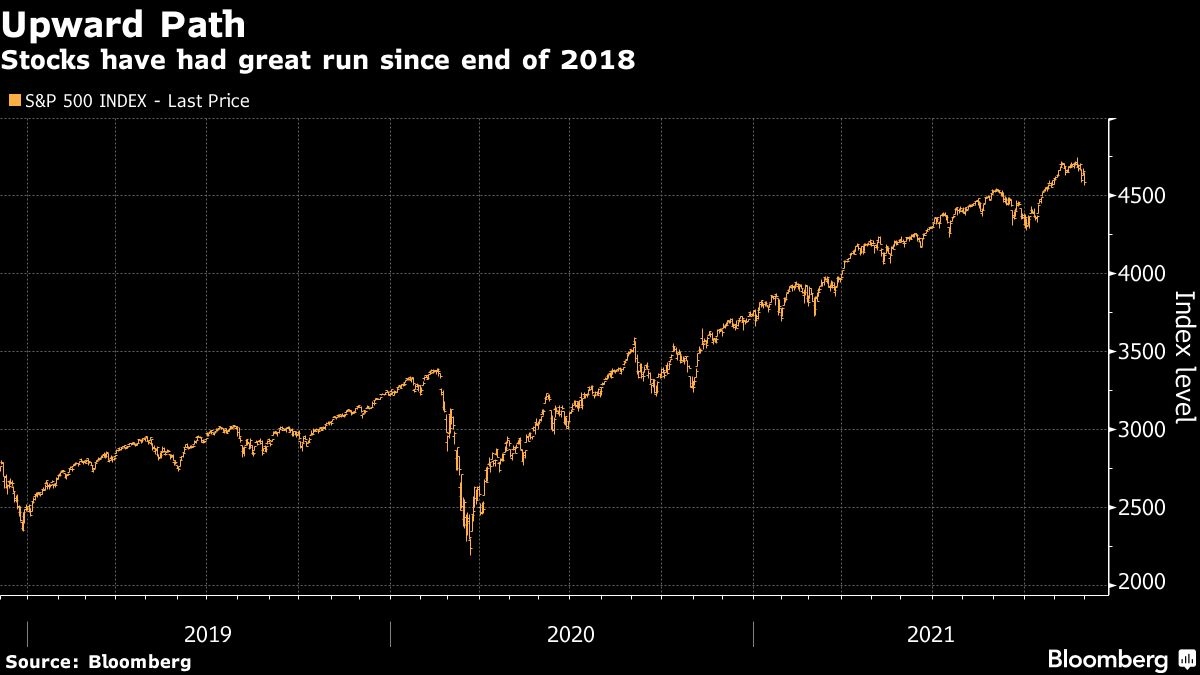 Since the start of his tenure as Fed chair in February 2018, Powell has gone out of his way to redefine the way the central bank looks at both its employment and inflation mandates, letting price increases accelerate past prior targets in the interest of getting more of the population back to work and at higher-paying jobs. At virtually every turn, markets cheered his dovishness, extending the Treasuries bull run and powering heady returns in stocks.

Now, Powell is suggesting the inflation target has been met. If the job recovery continues, he’s effectively prepared to usher in higher interest rates, according to Neil Dutta, head of U.S. economics at Renaissance Macro.

Powell “is opening the door to an earlier rate hike by signaling a sooner end to taper,” Dutta said. “The risk to markets would be if the Fed started tightening well before the employment goals were achieved. That is not happening right now. Between now and the time the tapering is done, employment will continue accelerating.”

Not that the Powell Fed has turned overtly hawkish -- yet. Even if asset purchases are wound down, each still represents additional fuel for the economy. And Powell hasn’t yet set a schedule for raising rates, though an earlier taper could bring hikes sooner than expected.

Higher rates haven’t always snuffed out bull markets. The S&P 500 rose an average 5.3 per cent in the 12 months following the first increase in 17 tightenings since 1946, according to a Ned Davis Research study on market returns and monetary policy. The pace of tightening, however, makes a stark difference: The equity benchmark fell 2.7 per cent on average during faster rate hikes while rising 11 per cent during slow ones. 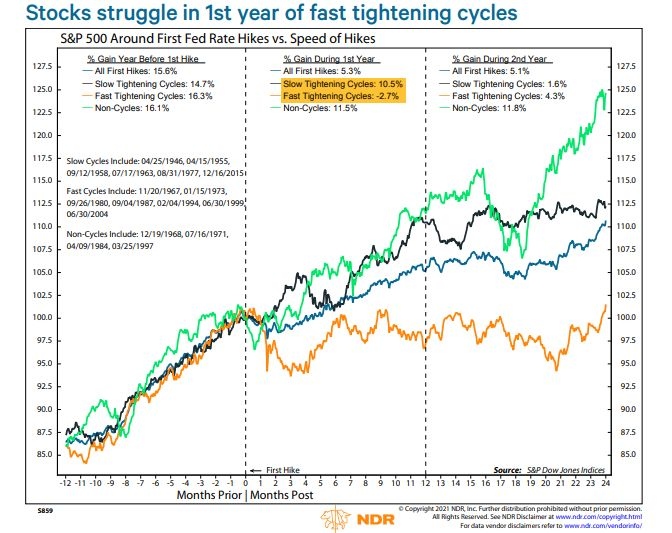 To some, Powell is simply catching up with the reality that emergency measures are no longer needed amid a booming economy. Critics including former U.S. Treasury Secretary Larry Summers has urged the Fed to tap the brakes on economic stimulus sooner than planned to avoid inflation getting out of hand.

Investors are also aware of Powell’s history of giving in to markets when their verdict is severe. In October 2018, he famously said that despite several increases, policy rates remained “a long way” from neutral and that financial conditions were “accommodative.” Three months later, with the S&P 500 points away from a 20 per cent plunge, he reversed course, saying the central bank was flexible and that officials were “listening carefully” to the financial markets. He repeated the delicate dance again in the summer of 2019, when comments about a mid-cycle adjustment sent stocks tanking.

“The market was spooked and within a few days, he walked it back. He still has that option,” Zhiwei Ren, portfolio manager at Penn Mutual Asset Management, said by phone. “I wouldn’t be surprised if he does the same thing if the market gets too volatile for him.”

Watching Tuesday’s testimony, Gokhman at AlphaTrAI was reminded of the 1980s comedy horror “Gremlins” in which a cute pet morphs into a monster wreaking havoc on a small town.

“Powell started out as this fuzzy character here to cuddle investors -- but now it looks like somebody fed him after midnight,” he said. “Maybe getting renominated for a Fed chair is like pouring water on the Gremlin,” said Gokhman, referencing a plotline in the movie that allows the Gremlins to replicate out of control.