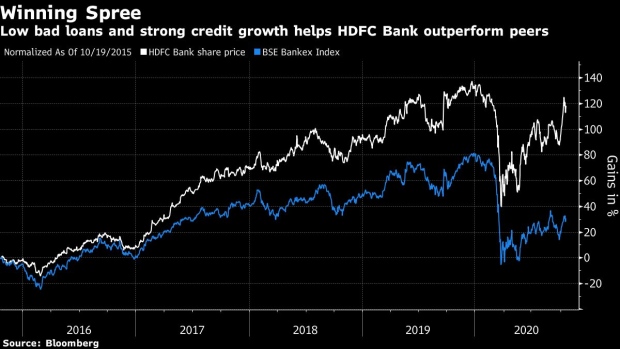 Net income was 75.1 billion rupees ($1.02 billion) for the three months to September, up from 63.4 billion rupees a year earlier, the lender said in a filing on Saturday. The profits were 17% higher than the 64.1 billion rupees, an average of estimates by 15 analysts, according to the data compiled by Bloomberg.

HDFC Bank’s results suggest that the nation’s financial sector, that’s been hit hard by the fallout from the pandemic after struggling borrowers failed to repay loans, may be more resilient than expected earlier. While a six-month moratorium and a loan restructuring program masked some of the bad loans, many banks became more cautious about lending to avoid further weakness in asset quality.

HDFC Bank’s gross bad-loan ratio narrowed to 1.08% as of September end from 1.36% in the previous quarter. According to the lender, the ratio would have been 1.37% if the nation’s top court didn’t allow banks to continue with a relaxation in soured debt recognition, over-riding Reserve Bank of India’s order.

The Mumbai-based lender said its loan book grew 16% in the September quarter from a year earlier, out pacing an average 5.1% rise for the nation’s banking sector. CEO-designate Sashidhar Jagdishan, who takes over from Aditya Puri later this month, expects bad loans to rise to a decade high of 1.4-2.0%, he said in August.

Read about HDFC Bank getting a new chief after 26 years

A U.S. law firm has filed a class action suit on behalf of HDFC Bank shareholders over alleged improper lending practices in its vehicle-lending unit. The bank had also delayed reporting details of its loans, including its millions of retail borrowers’ repayment status, to one of India’s biggest credit bureaus.