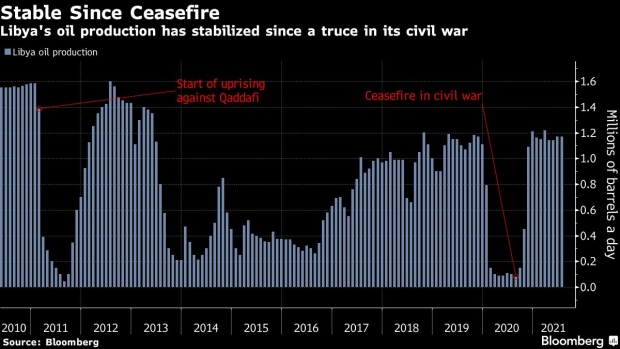 Mustafa Sanalla, chairman of the National Oil Company of Libya, arrives ahead of the 177th Organization Of Petroleum Exporting Countries (OPEC) meeting in Vienna, Austria, on Thursday, Dec. 5, 2019. Saudi Arabia, the dominant force in OPEC, is using both carrot and stick to talk other members of the oil cartel into defending prices at Thursday’s ministerial meeting. , Bloomberg

(Bloomberg) -- The head of Libya’s state energy company rejected an attempt by the OPEC nation’s oil minister to have him suspended and the board disbanded.

“The minister of oil cannot legally suspend me from work or refer me to investigation,” Mustafa Sanalla, the long-standing chairman of Libya’s National Oil Corp., said during an interview in his office in Tripoli on Monday. “The cabinet is the decision-maker and has the final word on the NOC.”

The interview came days after Oil Minister Mohamed Oun said Sanalla should step aside for an alleged “violation” of rules regarding business travel. While Sanalla said the dispute would not affect Libya’s crude production, it underscores the political tensions in a country that’s been mired in conflict and civil war for much of the past decade.

“The minister of oil or anyone else cannot question the legitimacy of the NOC’s board of directors,” said Sanalla, who’s been chairman since 2014. “I have no problem if a decision is issued to change the board of directors of the NOC through the cabinet.”

The oil ministry and office of Prime Minister Abdul Hamid Dbeibah didn’t answer several messages and calls requesting comment. The prime minister has called for a meeting between Sanalla and Oun on Sept. 5 to work out “their problems,” the government said on Twitter.

Sanalla effectively ran the energy sector -- including representing Libya at meetings of the Organization of Petroleum Exporting Countries -- until Oun was appointed in March as the first oil minister in seven years. Tensions between the two have since grown.

“The NOC would be much better off without the presence of the Ministry of Oil,” Sanalla said. “The ministry is a heavy burden on the NOC.”

Libya has Africa’s largest crude reserves, but production has been erratic since the overthrow of dictator Moammar Qaddafi a decade ago. A truce in the civil war around mid-2020 and the formation of a unity government have helped stabilize output in recent months at almost 1.2 million barrels a day.

The country is scheduled to hold elections on Dec. 24. If the vote happens peacefully, it could cap a United Nations-led process to reconcile rivals and formally end hostilities.

In recent years, the NOC was seen as one of the few institutions able to work across Libya’s political divides.

Sanalla said a shortage of money from the government to fix ailing oil fields, pipelines and ports meant he’d have to delay a production target of 1.4 million barrels a day from the end of this year to the middle of 2022. Libya should be able to pump 1.6 million daily by 2023 and 2 million in three years, he said, if “the budget’s available.”

Libyan officials have been in discussions with foreign oil firms such as Royal Dutch Shell Plc and Eni SpA about them investing again in the country. The NOC will this week sign a contract worth more than $100 million with Petrofac Ltd. that will see the London-based engineering firm develop the Erawan field, Sanalla said.

The NOC is conducting studies on the Gallo field, he said, which could help boost the output of state-controlled Waha Oil Co. by 100,000 barrels a day.