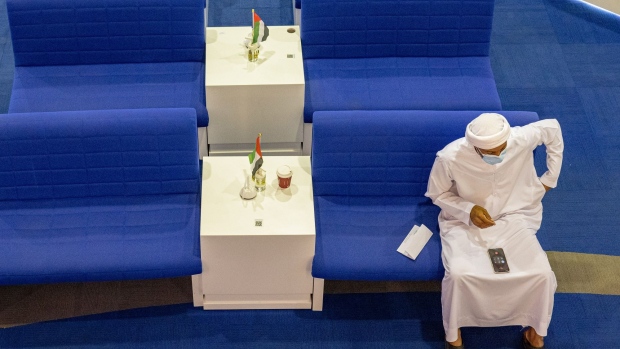 An investor makes a hands-free mobile phone call at the Dubai Financial Market PJSC (DFM) in Dubai, United Arab Emirates, on Wednesday, Aug. 24, 2022. While not as intense as in other parts of the world, inflation is percolating in the oil-rich Gulf, with Dubai among countries in the region that have set aside billions of dollars in inflation relief. Photographer: Christopher Pike/Bloomberg , Bloomberg

Healthcare provider Burjeel Holdings Plc is seeking as much as $368 million from its initial public offering in Abu Dhabi, joining a steady flow of Gulf companies tapping the capital markets.

Burjeel set the price range for its IPO at 2 dirhams ($0.54) to 2.45 dirhams per share, implying a market value of up to $3.3 billion. The IPO opens on Friday and runs until Oct. 4 for both retail and institutional investors.

Investor demand for listings in the Gulf has been strong, with the region emerging as a bright spot in a quiet IPO market globally. Still, the outlook is darkening with oil falling almost 40% since June on fears that a global economic slowdown caused by central banks’ aggressive policy tightening will hurt energy consumption.

Burjeel, which had initially sought a $750 million deal, scaled down its IPO to a local affair after a firm controlled by Abu Dhabi’s royal family bought a 15% stake in it. The company is offering a 11% stake and expects to make trading debut on Oct. 10.

Founded by Shamsheer Vayalil and owned by VPS Healthcare, Burjeel is set to be the first privately-owned firm to go public in the UAE this year. It operates hospitals and medical centers in the UAE and Oman and is planning an expansion into Saudi Arabia.

Chairman Vayalil told Bloomberg TV on Thursday the firm aims to strengthen its balance-sheet and expand operations with the IPO proceeds. “What we wanted to do with this IPO is to make the balance sheet stronger and make sure that our scale of plans are intact,” he said.

JPMorgan Chase & Co. is acting as capital markets adviser for the offering, while Dubai Islamic Bank is the lead manager.