Canadians have become more confident in the prospect of wage hikes if they leave their job, another sign of health for the country’s labour market.

The share of workers who say switching jobs would leave them better off financially has jumped sharply since 2018, according to a Nanos Research Group poll conducted for Bloomberg. Almost two in 10 respondents said their wages would increase if they lost their jobs or chose to find a new one. That’s an improvement from prior surveys, including one in December 2018, when as few as 12 per cent said they would be able to find a job that pays more.

The results are broadly consistent with a strong labour market over the past year, and appear to reflect confidence that the economy can sustain recent wage gains. Stronger wage expectations would be good news if they encourage labour churn, whereby workers feel free to leave their jobs to find something more suitable.

It’s a process Bank of Canada Governor Stephen Poloz has said is worth nurturing because it’s an important source of productivity gains. In December, Poloz said labour churn has picked up recently, indicating workers have the confidence to leave their positions for new ones.

“The average wage increase of people who switch jobs is very high, in the 10 per cent to 12 per cent range, because people are finding the right matches,” Poloz told reporters Dec. 12 in Toronto. “Those matches inevitably bring higher productivity.” 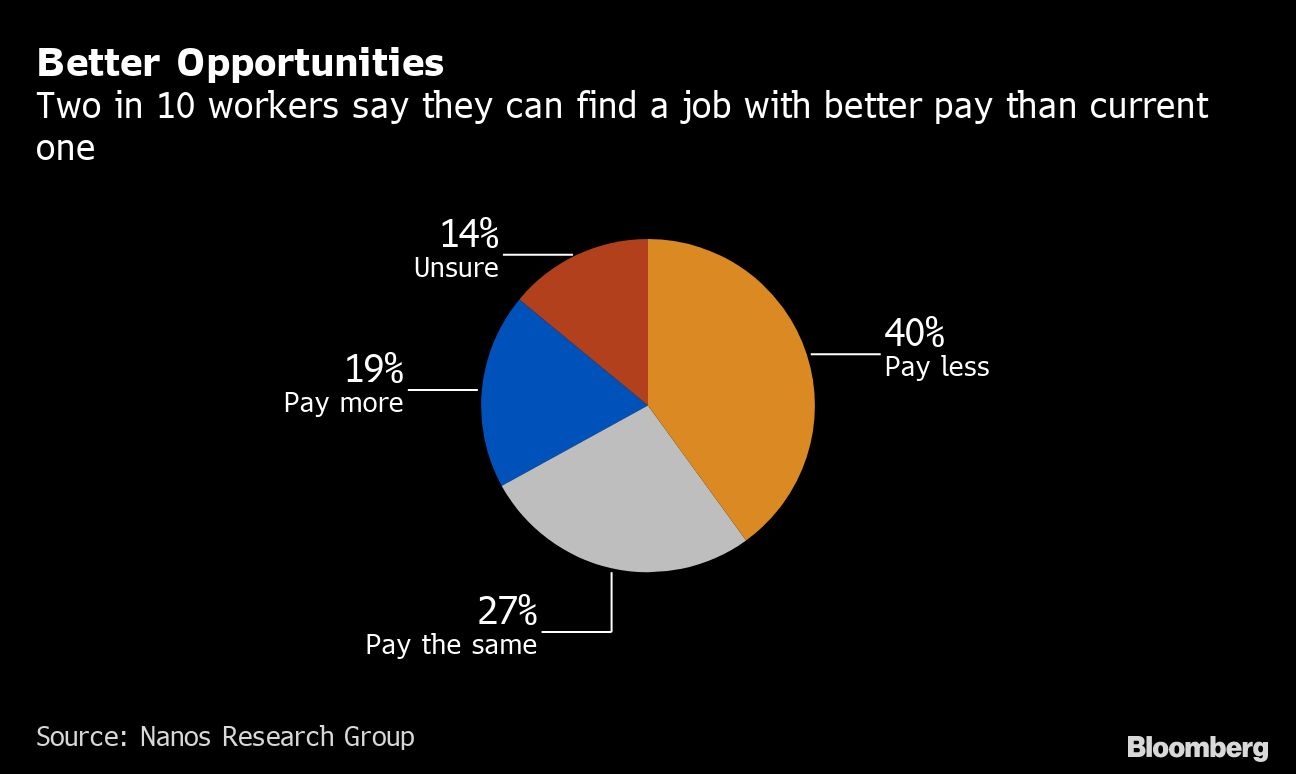 The Nanos poll results are in line with findings published by the Bank of Canada in its fourth quarter survey of consumer expectations, which found rising probabilities of Canadians voluntarily leaving their jobs. The pick up in wage expectations largely reflects improved sentiment among younger workers, the data show.

Last year, the nation’s economy added almost 300,000 jobs, the unemployment rate hovered near four-decade lows and wages rose near the fastest pace since the recession. The strength of the labour market, in part, allowed the Bank of Canada to keep interest rates on hold, even as its counterparts in other countries lowered rates due to slowing economic growth.

“We’re now several years into having unemployment in the six per cent to below six per cent range,” said Brendon Bernard, an economist at Indeed Canada. “That’s going to help build confidence in the job market overall.”

It’s clear the labour market boon hasn’t been equally distributed across Canada. Residents in the Prairies are most pessimistic about job pay, with only 14 per cent expecting higher pay if they left their job. That region is also the only one where more than half of respondents expect they would get paid less if they had to find a new job. Confidence in Quebec was highest of all provinces, with 26.2 per cent saying they would get paid more in a new position.

The poll, a hybrid telephone and online random survey of 1,000 people, was taken between Jan. 27 and Jan. 29. The survey has a margin of error of 3.1 percentage points.