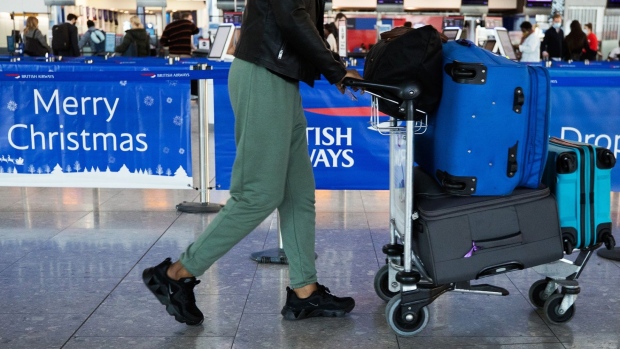 A passenger passes a 'Merry Christmas' sign in the check-in area in at London Heathrow Airport Ltd. in London, U.K., on Saturday, Dec. 19, 2020. The pandemic has put a third of all tourism jobs at risk, and airlines around the world have said they need as much as $200 billion in bailouts. , Photographer: Bloomberg/Bloomberg

(Bloomberg) -- Families flying abroad for Christmas face strikes at Heathrow airport, with baggage handlers set to walk out for three days just as the end of the school term triggers a mass exodus via the London hub.

About 350 staff at Menzies Aviation, which provides ground-handling services for carriers including American Airlines and Deutsche Lufthansa AG, will strike from Dec. 16, the Unite union said in a statement Friday. The action will affect three Heathrow terminals as workers push for a pay rise.

Unite said passengers face “disruption, delays and potentially cancellations,” though an earlier strike at Menzies over three days last month had little impact, according to airlines and Heathrow. That’s after the firm reached an outline deal with the GMB union representing the bulk of its handlers.

The UK has been hit by a wave of strikes as labor groups campaign for pay deals matching inflation, with further action planned by rail, postal and health workers every day in the run up to Christmas. Unite says Menzies handlers haven’t received a 9.5% raise promised to the firm’s cargo workers at Heathrow.

The airport said in a statement that it’s aware of the industrial action at Menzies and is encouraging affected parties to continue with their contingency planning to minimize the impact on passengers.