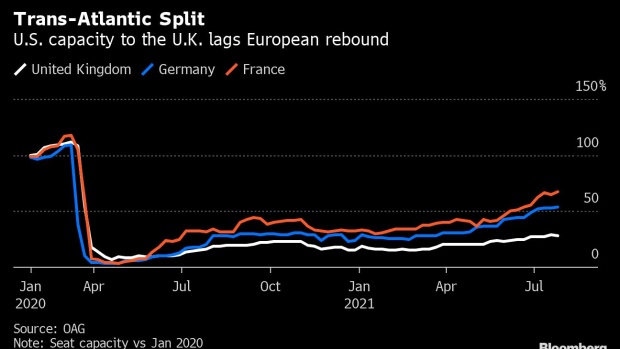 (Bloomberg) -- London Heathrow airport Chief Executive Officer John Holland-Kaye said he expects Britain to announce that it’s opening up to Americans fully vaccinated against Covid-19 by the end of this month.

The move would allow U.S. visitors to enter the U.K. on the same basis as Britons, who are no longer required to self-isolate on their return from most medium-risk countries, and could be extended to include travelers from the European Union, Holland-Kaye said in an interview Monday.

Heathrow, Europe’s busiest hub before the pandemic, has said Britain’s decision to retain quarantines for most foreign arrivals has squandered gains from a rapid vaccination program and held back the economy. Routes between the EU and U.S. have recovered to almost 50% of pre-pandemic levels after Brussels chose to let in fully vaccinated Americans. The U.K. figure remains down 92%.

“We’ve seen how Europe is opening up to the U.S. and the difference is shocking,” Holland-Kaye said. “The government here says it needs to be sure it can manage this safely. We think they can do it by the end of July.”

He said there’s significant pent-up demand from Americans wanting to come to the U.K., including CEOs, and that their inability to do so could lead to business going to mainland Europe, and jobs with it. Others are eager to visit friends and family, and tourist demand is picking up.

British Airways and Virgin Atlantic Airways Ltd. are trialling a system that quickly verifies someone’s vaccination status, with a goal to show the government that airlines can check it before passengers reach border-control queues.

There’s little indication that the U.S. is about to open to European visitors.

“There certainly are talks at a bilateral level,” Holland-Kaye said. “But we are not sensing any momentum from the U.S. on opening up to the U.K. or Europe.