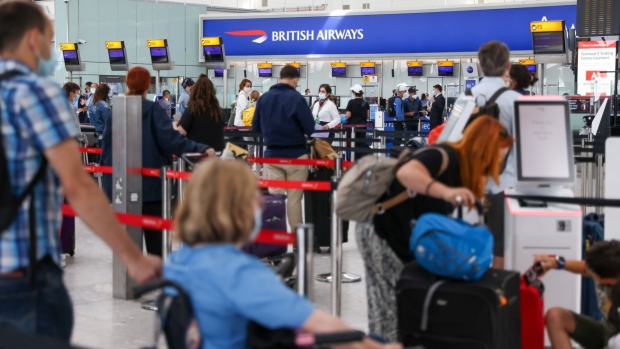 Passengers line up at the British Airways check-in area in Terminal 5 at London Heathrow Airport Ltd. in London, U.K., on Tuesday, July 27, 2021. International Consolidated Airlines Group SA, parent company of British Airways, are due to report earnings on July 30. , Bloomberg

London’s Heathrow airport said it saw its first full quarter of passenger growth since 2019 as restrictions eased and travelers returned to flying.

Traffic reached 28% of pre-pandemic levels in the third quarter, the airport said Tuesday as it reported financial results. However, 3.4 billion pounds ($4.7 billion) in losses since the start of the Covid outbreak “underscore the long road ahead,” the airport said.

“We are on the cusp of a recovery which will unleash pent-up demand, create new quality jobs and see Britain’s trade roar back to life,” Heathrow Chief Executive Officer John Holland-Kaye said in the statement. “But it risks a hard landing unless secured for the long-haul.”

He called for continued focus on global vaccination to reopen borders without testing, a fair financial settlement for the airport as it continues to negotiate with U.K. regulator the CAA, and a global mandate for sustainable aviation fuels.

Aviation’s recovery so far has been bumpy, as vaccine campaigns meet with new variants of the virus and some parts of the world lag behind in reopening. The U.K. has begun easing its own restrictions, while adding a cheaper Covid-test requirement for vaccinated arrivals. The all-important U.S. market will open to British and European Union passengers who have been inoculated from Nov. 8.

The CEO predicts that demand will continue to increase with simpler travel rules and lighter testing requirements. Heathrow saw 10.2 million passengers in the 9 months ended September 30, versus 19 million in the same period in 2020. Revenue fell 27% to 695 million pounds, while the adjusted loss widened by 36% to 1.07 billion pounds.

The airport has been operating two runways since early summer to meet the higher levels of demand, and terminals two, three and five are fully operational.