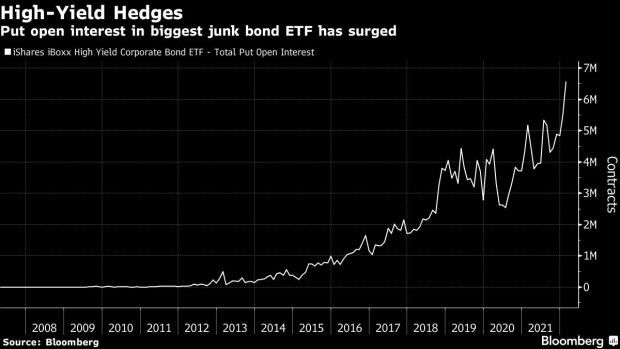 (Bloomberg) -- Whatever happens in Ukraine or how it affects Federal Reserve policy, the outcome will land in markets where investors have had time to prepare for the worst. It may be one reason the worst has so far been avoided.

They’ve been steadily boosting bets against equities, shaking off a reluctance to short tracing to last year’s meme stock upheaval. Bearish bets on the largest exchange-traded fund tracking the S&P 500 have surged, while put open interest on bond-focused products has risen to historic levels. Meanwhile, professional managers have been hedging their credit exposures.

The process, undertaken when the Fed started to indicate it was serious about taming inflation, is starting to look fortuitous with tension building around Russia and Ukraine. Equity markets proved resilient overnight, shaking off a decline in futures that at one point reached nearly 3% on the Nasdaq 100 Index.

“When markets are at record highs, there’s a lot of room for downside movement,” Randy Frederick, managing director of trading and derivatives for Charles Schwab, said by phone. “I would think that might diminish the impact of this.”

Investors have been on edge for weeks as Russia’s troop buildup along its border with Ukraine escalated, with the White House warning an invasion could be imminent -- something Moscow denies. A constant barrage of news bulletins have added to the agitation, with the Biden administration’s aggressive rhetoric on Russia becoming a focal point for traders.

Short interest as a percentage of shares outstanding in the SPDR S&P 500 ETF Trust (ticker SPY) has doubled since the start of the year, last week reaching the highest since December 2020, according to data from IHS Markit Ltd. More than 6% of the fund is now out on loan.

Meanwhile, put open interest on SPY last week climbed to a two-month high, and a Cboe put-to-call ratio that tracks the volume of options tied to everything from single stocks to indexes, including the S&P 500 and the VIX fear gauge, has also spiked. Among Russia-centric securities, open interest for bearish put contracts on the $1.4 billion VanEck Russia ETF (RSX) -- which primarily tracks Russian energy and mining stocks -- surged to the highest level since April 2018 last week.

“It’s very similar to when a stock with very high short-interest gets some bad news. The decline tends to be much more orderly as those shorts starting taking profits and cover their positions,” he said.

“HYG and LQD have been a clear focus with more consistent hedging in those products than we have ever seen,” said Chris Murphy, co-head of derivatives strategy at Susquehanna.

Professional speculators have been similarly guarded. Shorts on credit ETFs tracked by Goldman Sachs Group Inc.’s prime broker have increased by 29% this year, outpacing the overall short-book for U.S. exchange-traded funds, which has risen by 5% in the same stretch. Overall, hedge funds tracked by the bank had at the start of February boosted short positions in every week but one since early November.

Investors were already hedging because of the Fed’s hawkish tilt, said Schwab’s Frederick. And while the case can be made the bearish buildups are a view on the market continuing to sell off, traders buy protection not because they want to have the chance to use it but because they’re hoping not to.

Still, while it’s possible that all of the protective stockpiles could make downside moves less violent, it could also be the case that the market is still misunderstanding what the macro implications of a Ukraine conflict are, according to Peter Chatwell, head of multi-asset strategy at Mizuho International.

Sanctions on Russia could push up inflation “and therefore ratchet up the central bank hawkishness even further. As such, rates products are unlikely to perform as a safe haven,” he said. “And when the rates products fail to act as a hedge, that will in turn generate more selling of risk assets.”