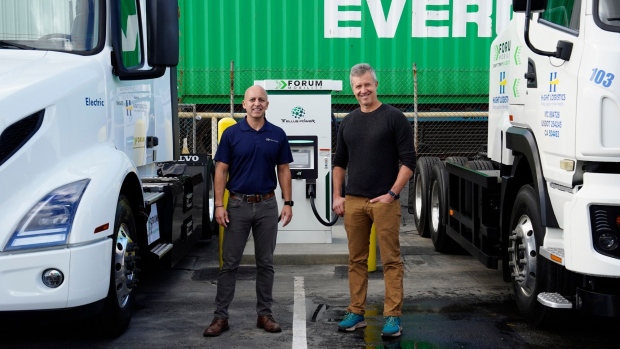 (Bloomberg) -- Every day, dozens of heavy-duty diesel trucks rumble into a freight yard lined with shipping containers near the twin ports of Los Angeles and Long Beach. As the big rigs pick up some of the 11 million cargo containers that pass through the ports each year, they spew an invisible mix of carbon dioxide, nitrogen oxide and particulate matter. The toxic exhaust is not only cooking the planet, but damaging the hearts and lungs of drivers and residents in surrounding low-income communities of color.

This is the hidden health and climate cost of consumer goods carried by tens of thousands of “drayage” trucks that shuttle shipping containers from ports to warehouses for distribution across the United States.

Drayage dates to the days when horses hauled goods from ports on carts called drays. Today, there are about 34,000 active drayage trucks in California, according to the California Air Resources Board (CARB). At the ports of Los Angeles and Long Beach, heavy-duty trucks account for 40% of greenhouse gas emissions, a 2019 University of California at Los Angeles study on the Southern California drayage industry found; together, these ports are the single biggest source of air pollution in the region.

Change is coming, though, in the form of electric trucks and new business models that could speed the transition to a zero-emission drayage industry. A proposed regulation, likely to be approved this spring, would allow only zero-emission trucks to be added to a registry of vehicles authorized to work at California ports starting in 2024; all diesel trucks would be phased out by 2035. The move comes as ports in New Jersey are also taking steps to electrify. It represents a potentially seismic shift in trucking, a small part of the transportation sector but one with an outsize contribution to greenhouse gas emissions and pollution in disadvantaged neighborhoods. Electrifying drayage trucks in particular could have a substantial impact on public health in communities surrounding the ports.

“A lot of experts call it the diesel death zone,” says Colleen Callahan, co-executive director of UCLA’s Luskin Center for Innovation and co-author of the university’s study, which cited significantly higher rates of asthma among children living near the ports. “You have these kids going to school adjacent to rail yards and freeways where all these diesel trucks are transporting goods from the ports.”

But there are a few hurdles in the way of this electric future. While more heavy-duty electric trucks are coming to market, charging infrastructure for them remains nearly non-existent. Then there’s the price tag. Diesel drayage trucks can cost $100,000 to $200,000; electric versions retail for more than twice that. Most drayage truckers are independent contractors who own their own rigs, but often lack the capital to go electric, or the time or wherewithal to navigate government bureaucracy to obtain incentives available for zero-emission vehicles.

“The regulations are probably just going to get stricter,” says Rudy Diaz, founder and president of Hight Logistics in Long Beach, which runs 50 trucks a day between the ports and inland distribution warehouses. “But these electric trucks are expensive.”

That’s where startups like Forum Mobility come in. The Oakland, California-based company aggregates rebates for electric trucks and infrastructure to purchase the vehicles and install charging depots, then supplies the trucks and chargers to drayage operators for a monthly subscription fee. On Tuesday, Forum Mobility announced a $400 million joint venture to acquire heavy-duty electric trucks and install charging infrastructure principally in California, financed by a fund led by CBRE Investment Management and venture firm Homecoming Capital. Forum also closed a $15 million Series A funding round from Amazon.com’s Climate Pledge Fund and other investors.

“Small businesses all over California have the oldest and dirtiest trucks and they're being told they must transition to zero-emission vehicles,” says Matt LeDucq, Forum Mobility’s co-founder and chief executive officer and a veteran of the solar industry. “But you can only do that after you monetize a plethora of incentives. Those are really hard to get, really time-consuming and really complicated, and if you're driving a truck 12 hours a day, five or six days a week, you’re probably not applying for them.”

The rebates Forum is able to tap into can be substantial. CARB, the state’s chief climate regulator, offers a $150,000 voucher to offset the cost of an electric drayage truck. The federal Inflation Reduction Act kicks in another $40,000. Some regional air districts in California provide additional incentives, while another state program designed to reduce the carbon intensity of transportation fuels allows owners of electric trucks to sell carbon credits to polluters. (Such regulatory credits, for instance, helped fuel Tesla Inc.’s profitability.) The California Public Utilities Commission, meanwhile, in November approved a five-year, $700 million program to build charging infrastructure for heavy-duty trucks. And the IRA provides up to $100,000 per commercial charging station.

On a December morning at Hight Logistics, a diesel tractor-trailer noisily executes a U-turn and heads out the gate, while an electric Kenworth rig quietly backs into a parking space. The truck sits next to four other battery-powered behemoths — three BYD models and a Volvo — and three dual-port high-voltage charging stations capable of handling six vehicles, all owned by Forum Mobility and supplied to Hight Logistics for a monthly fee. Diaz, standing next to a row of zero-emission trucks emblazoned with Forum and Hight’s Logos, says the stress of chasing rebates and the looming demise of diesel drayage trucks prompted him to become Forum’s first customer.

“I'm not an electric guy,” he says. “Realistically, I don't have the time to investigate all these grants, figure out how to get the money, submit applications and do all that legwork.”

Like many drayage companies, Hight Logistics uses contract drivers and their trucks to haul freight for its shipping-company clients. The zero-emission truck directive coincides with the implementation of a California law known as AB5, which will force many logistics companies to hire contractors as employees. That puts owners like Diaz in a double bind: He needs to bring some contractors in-house, while providing them with electric trucks to comply with the mandate, but neither he nor the drivers have the capital to electrify their existing rigs.

Andre Freeman, manager of freight policy at CARB, says companies like Forum Mobility could offer a solution to that conundrum. “I think that's going to help out a lot of those smaller owner-operators,” he says. “Whether it's through a subscription service or a more conventional leasing setup, a full-circle shop comes in with the vehicles and infrastructure and all you have to do is just afford the monthly payments.”

Diaz plans to have 10 employee-driven electric trucks in operation by the end of 2023, though he notes that electrification comes with risks. “It's all new technology so we don't know how the trucks are going to hold up,” he says. “If they're going to have issues, how long would repairs take and how costly would they be? If the trucks do not perform as intended, what happens then?”

The BYD and Kenworth trucks have a 150-mile range. That’s suitable for hauling containers from the ports to nearby warehouses but insufficient for longer runs to the sprawling logistical complexes in the Inland Empire region of Southern California. For those trips, Diaz will deploy the 230-mile-range Volvo.

There are other obstacles. Matt Schrap is chief executive officer of the Harbor Trucking Association, a trade group that represents West Coast drayage operators. He says that while companies like Forum Mobility will help electrify the industry, the lack of charging infrastructure at ports and warehouses will stymie compliance with zero-emission regulations. “The truck is not necessarily the most difficult part, outside of the cost challenges,” says Schrap. “It's the infrastructure deployment, which you can't build fast enough.”

Electric truck chargers do require an enormous amount of power, as well as multimillion-dollar transmission improvements if the existing electrical infrastructure must be upgraded — a process that can take years. Forum Mobility sidestepped that dilemma at Hight Logistics because a previous owner had installed a high-capacity electrical system. “Right now we're only focusing on property where you can get power but eventually a lot of substations are going to need to be upgraded,” Browning says.

One potential competitor to Forum Mobility, with a similar business model, is a Long Beach startup called WattEV. The company is building a charging depot near inland logistics centers and planning others at Los Angeles ports for its electric “trucks-as-a-service” business.

Diaz says he’s already received inquiries from shippers interested in lowering their carbon footprint by transporting their products on Hight Logistics’ electric big rigs. “One of the reasons we’re doing this is to do our small part to help the planet and leave a smaller footprint for the generations to come,” he says. “If this brings an advantage to us regarding customers, we welcome it.”