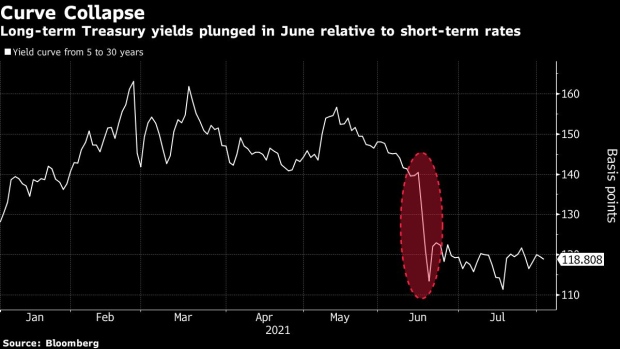 (Bloomberg) -- Hedge fund Alphadyne Asset Management has emerged as one of the biggest casualties from a short squeeze in the global bond market, with its $12 billion macro trading strategy snared in a series of bad bets on rising interest rates.

The investment firm is staring down losses of about $1.5 billion after its hedge funds plunged through July, according to people familiar with the matter. Its flagship Alphadyne International Fund lost about 10%. It also manages a leveraged version with about the same amount of assets.

Alphadyne’s losses, the largest to be publicly revealed among macro hedge funds, are particularly surprising because its strategy has never had a down year since it started up in 2006. Macro funds on average were up 6.8% in the first half, including a 0.5% advance in June, according to data compiled by Bloomberg.

A spokesman for New York-based Alphadyne declined to comment.

The losses show how even the most plugged-in investors were caught flat-footed by the sharp rally in U.S. Treasuries over the past four months. Amid some of the highest U.S. inflation readings in decades, interest rates have declined, perplexing bond traders across the world.

In one of the Treasury market’s most dramatic moves, the yield curve from five to 30 years flattened by more than 25 basis points in the span of three days in June, the sharpest drop since the peak of market volatility in March 2020. The gap barely widened through the end of the month. Alphadyne had bet heavily on curve steepeners and was slow to react, the people said.

In June alone, the Alphadyne flagship fund tumbled 4.3%, its worst month ever, with its managers positioned for a steeper U.S. yield curve and higher interest rates broadly, the people said, asking not to be identified because the information is private.

By July, Chief Investment Officer Philippe Khuong-Huu was continuing to pare back wagers, decreasing directional short bets and relative-value plays in the U.S. and Europe and closing out busted Treasury curve trades, according to a person familiar with the matter. All told, it lost another 2.5% last month.

Alphadyne was founded by Khuong-Huu and Bart Broadman, who were colleagues at JPMorgan Chase & Co. Its investors include pensions, insurance companies and sovereign wealth funds, according to its website. In 2017, Alphadyne spun off its Asia team into Astignes Capital Asia Pte, which focuses on trading interest rate and currency instruments in the region. Broadman is now CIO of Singapore-based Astignes.

Khuong-Huu, who the New York Times described in a May article as a Frenchman of Vietnamese descent, was Goldman Sachs Group Inc.’s head of interest rates in the early 2000s before forming Alphadyne. During his time at the Wall Street bank, he overlapped with Glenn Hadden, who spent more than a decade there trading global government bonds and U.S. Treasuries before leaving in 2011 to run interest-rate trading at Morgan Stanley.

Hadden joined Alphadyne in 2014 and is considered one of its top portfolio managers, according to people familiar with his trading. That’s largely paid off -- Alphadyne posted double-digit gains in each of the previous four years.

Hedge funds and other large speculators broadly scaled back bets against Treasury futures during the first five months of 2021, after offloading securities earlier in the year. By the start of June, leveraged funds had built up their largest net long position in 10-year note futures since 2013, according to Commodity Futures Trading Commission data.

Speculators have since taken a bearish turn again, particularly in so-called ultra bond futures. Leveraged funds now have the biggest net short position in those contracts in almost a year.