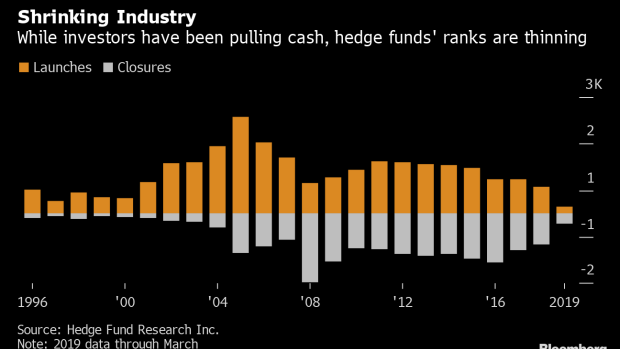 (Bloomberg) -- Arrowgrass Capital Partners, the hedge fund started by a group of former Deutsche Bank AG traders, plans to shut after getting hit with a fresh round of investor redemptions.

The 11-year-old firm, which employs more than 100 people in London and New York, will return capital and close, according to an investor letter seen by Bloomberg. Its assets had already slumped by half from the $6.4 billion it managed in 2017 before it received requests to withdraw another billion, according to people with knowledge of the situation.

Even in an industry where legions of firms are struggling to attract and hold on to investors’ money, Arrowgrass’s unwinding is swift. Customer patience wore out as the firm struggled to achieve satisfactory returns, and then a legal dispute over the departure of a senior executive spilled into public view last month.

Arrowgrass, however, blamed central bank policies for its demise.

“Ten years into the current cycle, as we observe global central banks initiating a new round of quantitative easing, we cannot with any reasonable conviction identify a near-term catalyst that would signal the end of the current cycle,” Nick Niell, one of the firm’s founders, wrote in the letter.

The hedge fund’s investing strategies were optimized to operate through a normal business cycle of five to seven years, he said.

The Arrowgrass Master Fund was down 2.5% through Aug. 23 this year after low-single-digit returns since 2016, according to a separate investor update seen by Bloomberg. By contrast, hedge funds overall were up about 6.4% in the first eight months, according to Eurekahedge. Still, Arrowgrass never posted a full-year loss, one of the people said.

Around the world, customers are pulling back from hedge funds after years of poor performance that failed to justify their relatively high costs. Investors have yanked almost $56 billion this year -- 50% more than in all of 2018, according to eVestment. More hedge funds have shut than started in each of the past three years, and those that do launch are typically far smaller than funds born before the financial crisis.

Arrowgrass was started in 2008 by Niell, Henry Kenner and other former Deutsche Bank traders. The multi-strategy money manager focuses on event-driven and relative-value investing, sometimes betting, for example, on the success or failure of corporate takeovers. The firm was said last year to be exiting its U.S. distressed-debt business and cutting jobs amid faltering performance in its flagship fund.

Michael Edwards, who served as global head of event-driven strategy and later oversaw the U.S. business, alleged in a lawsuit last month that the firm tried to persuade him to delay leaving to avoid investor redemptions, according to court filings. He said a so-called key man departure clause would allow certain large investors to exit, potentially costing the firm tens of millions of dollars in management fees.

Arrowgrass accused him of breaching his agreement with the firm and is seeking to recoup money it says he shouldn’t have been paid. He declined to comment when reached by Bloomberg.

--With assistance from Joshua Fineman and Dan Reichl.

To contact the reporters on this story: William Canny in Amsterdam at wcanny3@bloomberg.net;Nishant Kumar in London at nkumar173@bloomberg.net;Sridhar Natarajan in New York at snatarajan15@bloomberg.net

To contact the editors responsible for this story: Shelley Robinson at ssmith118@bloomberg.net, Patrick Henry, David Scheer