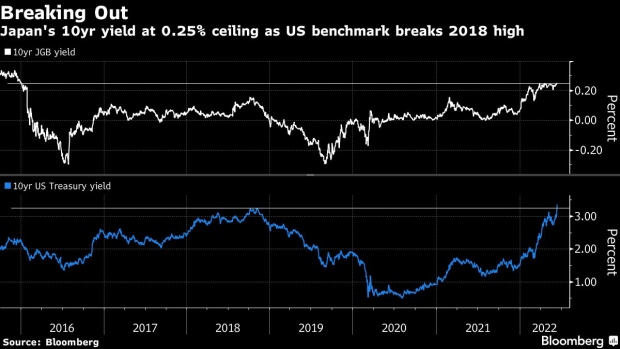 (Bloomberg) -- BlueBay Asset Management is gearing up for battle with the Bank of Japan.

As the BOJ escalates attempts to keep a lid on bond yields, BlueBay is betting the central bank will be forced to abandon a policy that’s increasingly out of sync with global peers. The BOJ’s so-called yield curve control is “untenable,” according to Mark Dowding, BlueBay’s London-based chief investment officer.

“We have a sizable short on JGBs,” Dowding, whose firm oversees about $127 billion across hedge funds and other fixed income products, said in an interview on Monday.

Yields on 10-year Japanese bonds breached the upper end of the BOJ’s target on Monday and have remained at elevated levels even after the central bank accelerated its planned bond-purchase operations and included longer maturities.

Ten-year yen swap rates have also surged, breaking their close relationship with domestically driven yields. At over 0.50%, the former have pushed well past the central bank’s 0.25% ‘line in the sand’ for benchmark bonds, suggesting international traders believe higher yields and a policy change in Japan are inevitable.

There is “little downside to being short Japan rates via futures or yen swaps,” Dowding said. “Yield curve control is designed so that the more the Fed hikes, the more the BOJ is going to need to ease and grow its balance sheet. This is what makes it untenable.”

For now, Japan’s policy makers are defending their yield target. The central bank boosted scheduled purchases of five-to-10-year debt to 800 billion yen ($6 billion) Tuesday from an expected 500 billion yen after the benchmark yield climbed to 0.255%. It also announced an unscheduled operation to buy longer-dated debt after the 30-year yield surged to 1.28% -- the highest since 2016.

BOJ Ramps Up Bond Purchases as Pressure Builds on Super-Longs

The yen tumbled to a 24-year low of 135.19 per dollar on Monday amid the growing policy divergence between the BOJ and the Fed. The Japanese currency traded at around 135 on Tuesday.

BlueBay started shorting Japan’s sovereign debt when the yen slid close to the 130 per dollar level several weeks ago, Dowding said. “Once yields move after a change, then we will look to take profits,” he said.