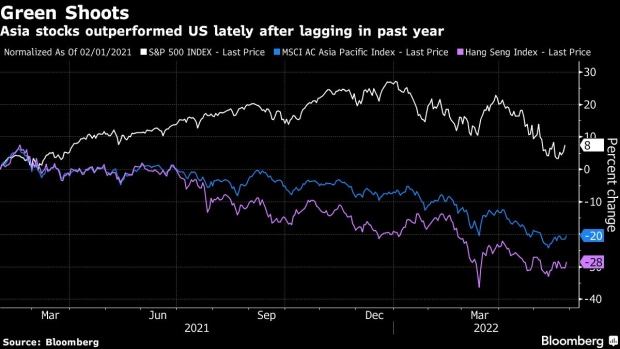 (Bloomberg) -- JPMorgan Chase & Co.’s hedge fund clients have returned to buying Hong Kong stocks since mid-March after continuous selling for more than a year, the Wall Street bank said in a note Thursday.

In China, flows have stabilized as purchases to cover short positions were offset by a reduction in bullish wagers in the last few weeks, the U.S. lender said.

“This is the fourth instance that we’ve seen since Jan 2020 of sharp selling, followed by stabilization…typically preceding a recovery in flows,” the investment bank wrote.

The comments add to signs of a shift in sentiment among Greater China stock investors as they weigh whether the deep pessimism that had engulfed the market is peaking. A prolonged rout has so far this year largely deterred stock-pickers from buying the dip.

The benchmark Hang Seng Index of Hong Kong-listed stocks and the CSI 300 Index of yuan-denominated shares traded in Shanghai and Shenzhen have both slumped by nearly a third since mid-February 2021.

A spokesperson for JPMorgan was not immediately available for comment.

Since late April, hedge funds have been net sellers of stocks that can benefit from Asia’s recovery from Covid, in addition to cooling toward beneficiaries of China’s move toward decarbonization this year, the bank said. By contrast, they have been adding to bullish bets and more recently reducing bearish wagers on stocks set to profit from Asia’s semiconductor chip shortage.

More broadly, the Asia-Pacific region has seen the most net buying by the bank’s hedge fund clients in the past month, after “extreme” selling in March and recent outperformance, JPMorgan said.

“Whether this trend continues is likely dependent on a number of macro risks that might need to be overcome, such as: higher inflation, supply chain issues from the Russia/Ukraine conflict and Covid lockdowns, and the risk of a growth slowdown,” according to the note.