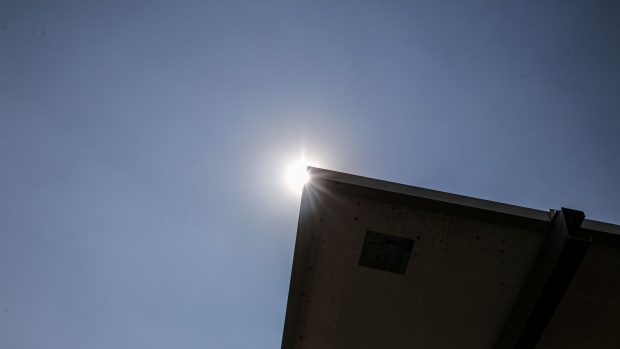 The sun shines through the grid-connected photovoltaic power system installed on the roof of an apartment block in Bengaluru, India, on Monday, Feb. 21, 2022. Solar power, which has become the cheapest source of new power, is growing fast. India aims to install 175 gigawatts of renewable energy, three times the amount currently deployed in the U.K., in 2022. Photographer: Dhiraj Singh/Bloomberg , Bloomberg

(Bloomberg) -- Capital Fund Management SA is looking more closely at all the ways in which banks’ climate exposure will start to feed into their share prices, as regulators roll out increasingly tough environmental, social and governance rules.

For now, banks’ climate disclosures aren’t precise enough to allow meaningful bets on their market values, said Pierre Lenders, head of ESG at Capital Fund Management in Paris. But with a barrage of requirements being rolled out -- from climate stress tests to emissions disclosure rules -- investors should be ready for that to change in a major way, he said.

In the event that climate stress tests reveal “significant expected losses” among banks, then “we’re talking about starting to integrate in the price discovery mechanism elements that weren’t even considered at all,” Lenders said in an interview. Ultimately, “you can certainly have quite a big repricing,” he said.

European bank regulators are set to start work later this year on adding climate-change risks to the framework for setting capital requirements, marking a shift that would penalize lenders that fail to prepare for losses from extreme weather and the costs of decarbonization. The preparations will follow the European Central Bank’s landmark climate stress tests, which started this month.

Though fraught with controversy, the ECB has signaled that individual capital charges via so-called Pillar 2 requirements may ultimately be a consequence of the identification of climate risks. This year’s stress test could also feed through indirectly to the capital bar, the ECB said in January.

“When we see that there is going to be real steps being taken by regulators to force banks to be serious about greening their book, then we will say, OK, now this factor is financially material,” Lenders said.

Currently, banks aren’t providing enough transparent data for investors to get a real sense of where the risks lie, Lenders said. Some have started disclosing their financed emissions -- also known as Scope 3 -- which include the carbon footprint of clients. But the information is patchy and hard to compare across lenders.

“When you look at the numbers and you investigate, you find they disclose few of the 15 categories defined by the greenhouse-gas protocol for Scope 3,” Lenders said.

Banks often provide quite specific details about reducing business travel, for example, but that’s “only a very small fraction of the story,” he said. “You’re not going to say that you like JPMorgan and you hate Morgan Stanley, just because one travels less than the other. What matters is what they do in terms of financing the real economy.”

Since the Paris climate agreement was struck in late 2015, the world’s biggest banks have provided about $4.2 trillion of loans and bond underwriting services to the fossil-fuel industry, according to data compiled by Bloomberg. JPMorgan Chase & Co., Citigroup Inc. and Bank of America Corp. helped arrange the most coal, oil and gas bonds in the period, while Wells Fargo & Co., JPMorgan and Citigroup were the biggest providers of loans, the data show.

At the same time, financial firms representing $130 trillion in combined assets have committed to net-zero emissions by the middle of the century. But few have actually mapped out convincing paths to achieving that goal. That’s led those tracking the industry’s climate promises to propose tougher, more readily measurable standards.

Earlier this year, the Science Based Targets initiative said it was exploring the option of setting a hard deadline for banks to halt new fossil-fuel finance, if they want their net-zero emissions targets verified by the United Nations-backed group.

The Net-Zero Banking Alliance, whose members include JPMorgan, Citigroup, Bank of America and Wells Fargo, has said it requires that banks build their “net-zero pathways and targets in accordance with credible and ambitious science-based scenarios.” Though the alliance doesn’t mandate the use of any specific verifier, it said it welcomes “partners like SBTi.”

Still, some in the industry have warned that Russia’s war on Ukraine and the deepening energy crisis it’s spawned may complicate bank efforts to stop financing fossil fuels. The head of investment strategy at RBC Europe Ltd. said in March that banks may be forced to put their climate goals on hold and even step up funding for coal in response to the war.

CFM hasn’t yet started buying and selling bank stocks based on their climate risks, Lenders said. But that will probably change. “It’s going to be a significant driver,” he said.