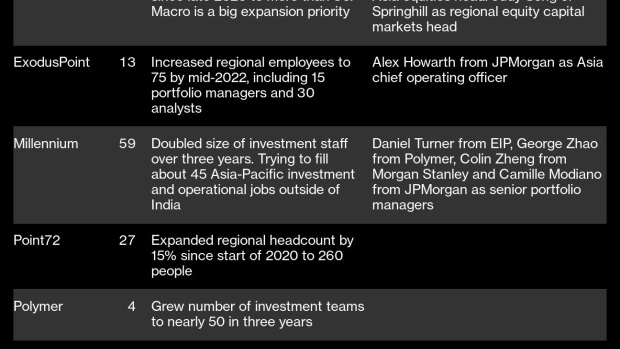 (Bloomberg) -- It’s been a rough year for hedge funds in Asia, but that doesn’t mean they’re all struggling.

Large global and regional funds have been adding people in Asia at a breakneck pace, as volatile markets favor firms that employ multiple strategies and investment teams while smaller local peers underperform.

Izzy Englander’s $59 billion Millennium Management has more than 50 investing teams in the region, having doubled the number of such staff over the past three years, according to a person with knowledge of the matter. It is trying to fill another 45 investing and operational jobs in Asia-Pacific outside of India, postings on its website suggest. Balyasny Asset Management now has just over 30 trading pods in Asia, triple the figure in late 2020, said a person familiar with the situation.

These multistrategy giants are ramping up Asian operations in a year when smaller local peers with a narrower investment scope have struggled to make money. China’s regulatory shifts, geopolitical tensions and rising interest rates wreaked havoc on markets, leading to widespread losses. That has not only called into question managers’ ability to hire and retain the best talent but also put a dampener on would-be hedge fund startups.

“Single-manager funds are expanding slower than multistrategy platforms,” said Will Tan, a managing director at recruitment firm Principle Partners Pte. “The idea of shared resources, cost efficiencies and robust risk management has become attractive to a growing number of investors.”

The so-called hedge fund platforms like Millennium and Point72 allocate money to pods that employ diverse trading strategies, share support staff and are subject to tight risk controls. That has enabled them to deliver smooth returns in rough markets. Citadel’s flagship Wellington multistrategy hedge fund gained about 30% in the first 10 months of 2022 while Millennium’s hedge fund rose 10.3%. By contrast, Asia-focused hedge funds lost 13% in the same period, and China funds plunged nearly 19%, according to Eurekahedge Pte data.

The elite group of platforms operating in Asia has swelled in the past six years, with the arrival of ExodusPoint, Polymer and Schonfeld. To fend off competition, some of those firms could extend job offers in as little as one or two months after the initial coffee meetings with candidates, said three people with knowledge of the matter.

Direct rivals have always been a natural target for talent recruitment. In the past two years, Balyasny hired Andrew Fong, a 15-year Citadel veteran, as regional president, and Millennium’s Archana Parekh to head its Asia equities business outside of Japan.

But it’s becoming tougher to do that at a time when nearly all platforms are expanding. In Hong Kong, such firms were able to fill fewer than 15% of new jobs with alumni of their closest peers, according to a Bloomberg analysis of nearly 160 new local regulatory licenses awarded to them this year. Instead, almost a quarter of those positions went to hires from non-platform hedge funds, the data showed.

Hedge funds rely on taking a cut of investment profits to pay bonuses, usually the bigger part of compensation. Many can’t charge performance fees until they have recouped losses for clients.

This year, only 14% of Asia-Pacific stock-focused hedge funds have made money, according to Preqin data. Nearly a quarter have lost at least 40%. Combined with uncertainty ranging from the severity of the global economic slowdown to China’s shifting policy agenda, it gives incentives to portfolio managers, analysts and traders to seek a fresh start elsewhere.

Schonfeld, which oversees $14 billion of client capital, hired Paul Kim and Yusuke Saito as Hong Kong-based portfolio managers. Formers partners who helped run the Asia hedge fund of Snow Lake Capital, they left after the fund tumbled 31% in the first nine months of 2021. Schonfeld also lured Adrian Wong, previously of Brilliance Asset Management, whose flagship hedge fund plunged 41% in the first 10 months, according to two people with knowledge of the matter.

About 38% of the new platform licenses in Hong Kong this year went to hires from banks or brokers, amid a stampede led by Balyasny and Millennium for quant investing talent, especially those that seek to profit from index trades and asset swings, the Hong Kong data showed. Meanwhile, Asian countries have diverged in policy responses to rising inflation and interest rates, bolstering demand for macro investors who tap trends across equity, fixed-income, currency and commodity markets.

While platforms are still hiring investment professionals that specialize in technology, the new recruits tend to have broader regional or global mandates as companies move supply chains to reduce reliance on China. They are also adding staff in areas that lost favor during China’s technology stock boom, such as Southeast Asia, India, and the financial and energy sectors.

“Being a multistrategy fund, you are more versatile and nimble across cycles compared to single-strategy funds,” Tan said.