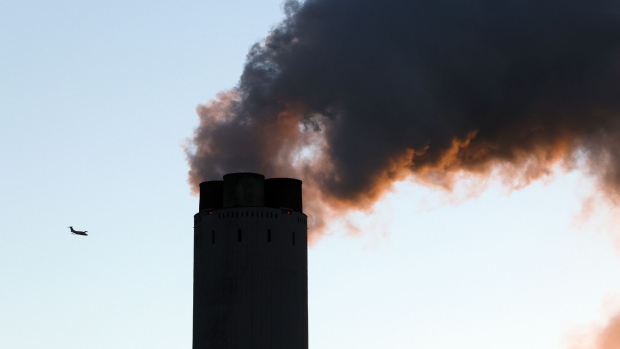 Smoke coming from a cooling tower at Uniper SE's coal-fired power station in Ratcliffe-on-Soar, U.K., on Thursday, Dec. 2, 2021. The recent drop in prices for coal and U.S. gas, as well as limited interest for LNG cargoes from some buyers in Asia, opened the way for added supply into Europe. Photographer: Chris Ratcliffe/Bloomberg , Bloomberg

The fund advanced almost 13% in November, helping push it to its best year since launching in 2012, according to a letter to investors seen by Bloomberg News. Northlander’s assets under management were about $340 million at the start of December.

The global carbon emissions markets are “currently providing investors with an opportunity to ‘buy fire insurance on a building already on fire’ and by doing so, a rational market place can actually help reduce future risks,” Northlander’s Chief Investment Officer Ulf Ek wrote in the letter. He declined to comment further when contacted by Bloomberg.

A new push by the EU to use the carbon market to achieve its ambition to cut emissions more aggressively this decade helped prices nearly triple this year. Carbon got an extra boost this winter as surging natural gas prices have made it more profitable to burn coal to produce power, increasing demand for permits.

Benchmark carbon futures climbed above 88 euros ($99) per metric ton on Wednesday for the first time. Ek expects the price to keep rising and get close to 100 euros by the end of the winter, according to the letter.

Ek was among a handful of investors who predicted in 2017 that EU policy to tighten the emissions market would increase prices, helping the fund gain more than 50% in 2018 as carbon prices soared. However the bet turned sour the following year as the permits declined, leading to a more than 50% loss for the fund.

The Northlander Environmental Fund, a new vehicle launched earlier this year to focus on carbon markets, is up about 39% after a 13% gain in November.