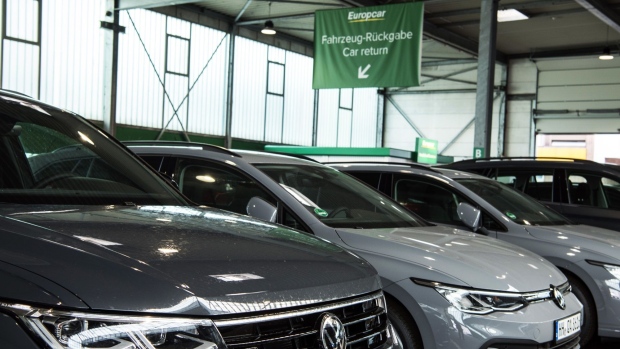 Hedge funds that took control of Europcar Mobility Group in a complex debt restructuring earlier this year are set to cash in more than twice the amount they invested after Volkswagen AG agreed to buy the company.

A group of five funds led by Anchorage Capital Group bought most of the 1.1 billion euros ($1.3 billion) of the French car rental company’s unsecured debt at as low as 40% of face value after the pandemic brought international travel to a halt in 2020. Their investment, after a swap of debt into equity completed in February, at least doubled as the funds’ 60% stake was valued more than 1.5 billion euros by the German carmaker last week.

“For the funds that took part in the restructuring, it is a great business,” said Mateo Salcedo, a credit analyst at Spread Research-Qivalio Group. “They got a high valuation due to the good moment the industry is going through, and the acquisition removes the uncertainty of what’s going to happen with the travel industry in 2022.”

Volkswagen teamed up with hedge fund Attestor -- another major creditor that became a shareholder as a result of the restructuring -- and Dutch mobility provider Pon Holdings to offer 2.5 billion euros as the French company slashed net losses in the first half of the year after it cut costs and travel rebounded in the U.S. and Europe. The car rental firm also benefited from weaker competition and delays in delivery of new vehicles, according to its latest earnings report.

Marathon Asset Management, Diameter Capital Partners and King Street Capital Management were also among the main investors that bought debt at a discount last year. The exact profit made by each fund depends on the timing of their investment and their contribution to the capital raise. Attestor will tender the company’s shares it holds and reinvest the proceeds with additional cash alongside Volkswagen and Pon.

Representatives for Anchorage, Attestor, Marathon and King Street declined to comment. Spokespeople for Europcar and Diameter did not reply to calls and emails seeking comment.

Europcar agreed on a major restructuring in November. The deal included the conversion of 1.1 billion euros of debt into equity, and an additional equity injection of 250 million euros, which was mostly provided by creditors.