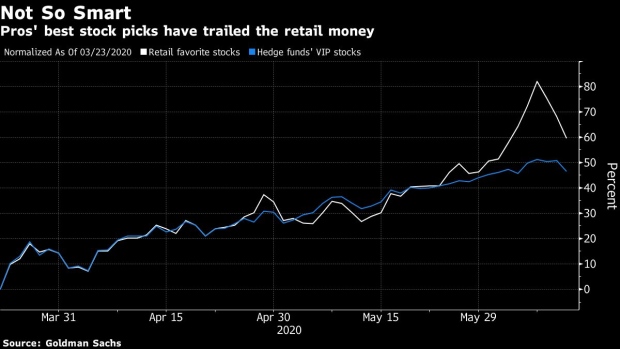 (Bloomberg) -- New positioning data shows how frustrating a straight-up rally in companies with shaky finances has been for professional speculators.

While they are getting a measure of recompense today, hedge funds have struggled after shunning airlines, hotels and restaurants, with exposure sitting near multiyear lows, data compiled by Morgan Stanley’s prime brokerage unit show. The aversion toward companies hit hardest during the pandemic contrasts with retail investors, who piled into stocks like American Airlines, putting all their chips on an economic reopening.

It’s the latest example of the widening division between Wall Street and Main Street. Professional money managers have been reluctant to embrace the most speculative stocks amid concern that the worst is not over with the coronavirus. Hedge fund clients at Morgan Stanley have stuck to the safety of the stay-at-home trade, with holdings in technology and health-care hovering near a decade high.

“I would venture to guess that hedge funds are looking at the fundamentals of investing. The typical recovery doesn’t happen this quickly,” said Tracie McMillion, head of global asset allocation strategy for Wells Fargo Investment Institute. “Maybe retail investors saw what happened in ‘07, ‘08 and are using that as their model and realizing that had you invested when that market was down, you would have had a significant return over the past decade.”

While hedge funds’ cautious stance helped them avoid deeper losses during the March selloff, it’s now pressuring returns with tech shares lately trailing cyclicals such as airlines. Earlier this month, prominent managers like Stan Druckenmiller and Paul Tudor Jones offered their mea culpas for missing the rally that lifted the S&P 500 up more than 40% over the last 55 days, the fastest advance since 1933.

To be sure, the decisions were looking better Thursday, as travel and leisure stocks tumbled amid signs that a possible second wave of the pandemic could be taking hold in some states. A Goldman Sachs basket of retail investors’ favorite stocks sank about 5%, extending a three-day, 14% drop that’s on course to be the worst since March.

Still, hedge funds are a long way from making up their lost ground. An index tracking the industry’s high-conviction stocks has risen about 7% in the past month. That compared with a gain of 17% for individual investors from their favorite bets.

The pain has been more pronounced from their bearish wagers. According to Morgan Stanley, the firm’s hedge fund clients started April with the biggest increase since 2020 in short positions against cyclical stocks and have been forced to buy the shares back to limit losses amid the rally. While burned, they refused to give up on their distrust in the economy.

“Hedge funds were actually selling cyclical longs last week, thus we have not really seen a shift in tone with respect to funds trying to get more long cyclicals,” Morgan Stanley wrote in the note to clients.

To Lauren Goodwin, economist and multi-asset portfolio strategist at New York Life Investments, the caution is warranted given the damage that the pandemic has done to some businesses. From Hertz to Whiting Petroleum, bankruptcies are pilling up. And the airlines industry is forecast to suffer a record $84 billion losses this year.

“If you’re sitting in a hedge fund’s shoes, you’re thinking we’re likely to get one or more wake-up calls,” Goodwin said. “That transition toward auto rentals, airlines, travel and leisure generally is one of the clear signals to us the rally has gone too far.”

The splitting views between the pros and the retail money may be a reflection of their social status and where they see the economy heading after the reopening, according to Shawn Cruz, senior manager of trader strategy at TD Ameritrade.

“Maybe it’s harder to get a good read on how the reopenings would go from your house in the Hamptons versus if you’re actually out there in what I call the real economy,” Cruz said. “I think the way a lot of retail investors are viewing it is that it’s sort of a given you come out of the other side of this still intact, that things look great moving forward.”