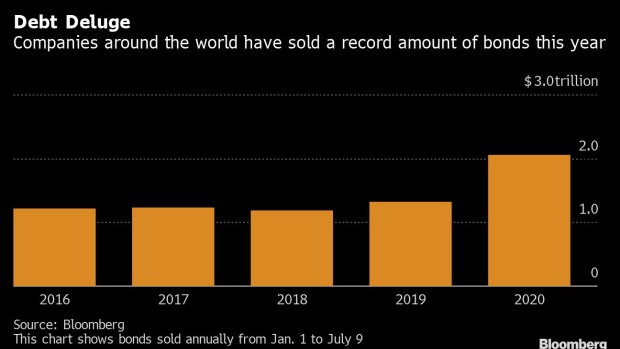 (Bloomberg) -- The deluge of debt sold around the world is raising risks for bond buyers, according to Man Group Plc, the world’s largest publicly listed hedge fund firm.

Companies around the globe have sold over $2 trillion of bonds this year, a 55% jump from the same period last year and a record tally, according to Bloomberg-compiled data. With Covid-19 wreaking havoc on the global economy, government and state-related agencies have also raised $1.6 trillion this year to fund stimulus spending, the most since 2009, the data showed.

“Post the market selloff in March, the supply could be easily absorbed by demand as investors added risk back at cheaper valuations, but we think we may now be close to a tipping point,” said Lisa Chua, portfolio manager at Man GLG, a unit of Man Group, which had $104 billion of assets under management as of the end of March.

Man Group joins other big funds such as Oaktree Capital Management in warning that markets could turn after a steep rally. Since March, when the Federal Reserve unveiled unprecedented steps including buying corporate bonds, risk assets from U.S. stocks to junk bonds have soared.

Returns on emerging-market high-yield notes, for instance, remained high at 4.2% in June. That was slower though than 6.6% gains the month before, the most in more than a decade, according to a Bloomberg Barclays index.

“We believe valuations now reflect much of the positive news,” with euphoria around central banks such as the Fed providing a back-stop well priced in, said Chua.

Even as markets have rallied, there are looming fears that the economic recovery will take longer than expected as the pandemic continues to spread globally. This is stoking concerns that markets could turn.

“Risk accumulation appears now back to the highs,” said Chua. “The risk from such a large amount of debt being sold globally is that the positioning of the buyers of that debt becomes so crowded that there may be no marginal buyer left.”