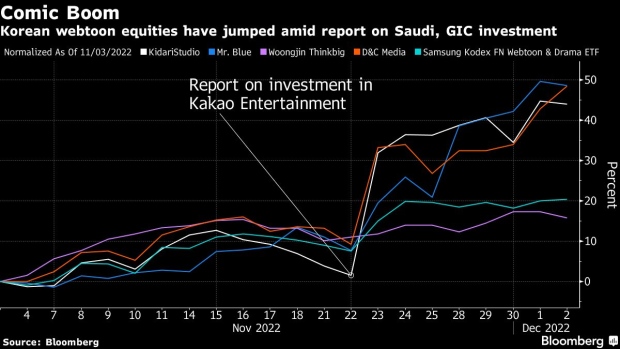 (Bloomberg) -- Following the success of K-pop bands like BTS and dramas including “Squid Game,” one fund manager is betting that “webtoons” will be the next Korean cultural phenomenon to take the world by storm.

GVA Asset Management Co., which manages about $600 million in assets, believes Americans and Europeans will soon catch onto Korea’s online comics, following the lead of consumers at home and in Japan. It put $15 million into unlisted webtoon producer Kenaz this year, becoming its largest shareholder.

“Right now there are great opportunities in the webtoon market,” Park Jihong, the firm’s chief executive, said in an interview in Seoul. “Although there are not many listed companies to invest in, we are focusing on non-listed companies with attractive valuations.” GVA Asset’s flagship fund has posted a 4% loss so far this year, outperforming the Kospi’s 18% slump.

Park expects “explosive growth” for online comics in the coming years, with some large-caps eventually emerging in the sector. Among larger stocks that already have exposure, internet giants Naver Corp. and Kakao Corp. operate webtoon platforms.

Korean online comics have drawn interest from overseas investors as well. Saudi Arabia’s wealth fund and Singapore’s GIC Pte are in talks to invest in Kakao Entertainment Corp., which plans to go public next year, according to a recent Maeil Business Newspaper report. GIC also invested this year in unlisted webtoon firm Ridi.

The market is still small, but it’s growing quickly. Sales of webtoons in Korea reached about $800 million in 2020, up from less than $300 million in 2017, according to a report last year from the Korea Creative Content Agency. Webtoon firms make money through subscriptions and also by licensing intellectual property from online comic stories to film and drama producers.

While it may be too soon to say whether webtoons will produce a hit as big as BTS or “Squid Game,” online comics are getting increasingly noticed by consumers and media, according to Tiffany Tam, an analyst with Bloomberg Intelligence.

“It is quite popular with Gen-Z and streaming platforms are taking note of adopting Webtoons into TV shows or movies,” she said. “The broader adaptation trend also coincides with a greater inclusion of foreign content and animation onto streaming platforms such as Netflix.”