Meta has self-inflicted wounds due to its focus on Metaverse: Insider Intelligence principal analyst

As Big Tech reels from the blow of higher interest rates and slowing growth, one top-performing hedge fund manager is going against the tide to bet on the sinking shares of Facebook-owner Meta Platforms Inc.

Expensive Silicon Valley tech would not normally feature on the shopping list for the Liontrust GF Tortoise Fund, which its manager Tom Morris describes as a “value-focused hedge fund,” seeking out shares it deems to be cheap.

That strategy enabled London-based Tortoise to beat 99 per cent of its long-short equity fund peers this year, with returns of about 22 per cent, according to data compiled by Bloomberg, versus a 17 per cent loss for the MSCI All-Country World Index and a 12 per cent fall for the Bloomberg Equity Long/Short Hedge Fund Index. Now though, Morris reckons it's time to be “sensibly contrarian.”

“We are value managers but parts of tech are actually value stocks now,” Morris, who co-manages the US$600 million fund with Matthew Smith, told Bloomberg in an interview in London.

Tortoise ran “relatively large” short positions on the S&P 500 and the Nasdaq early in the year, as well as on some US tech stocks, and had long positions in the likes of staples and health care, before switching the portfolio back toward neutral starting from April, according to Morris. More recently, the managers have moved to a “cautiously optimistic stance,” he added. 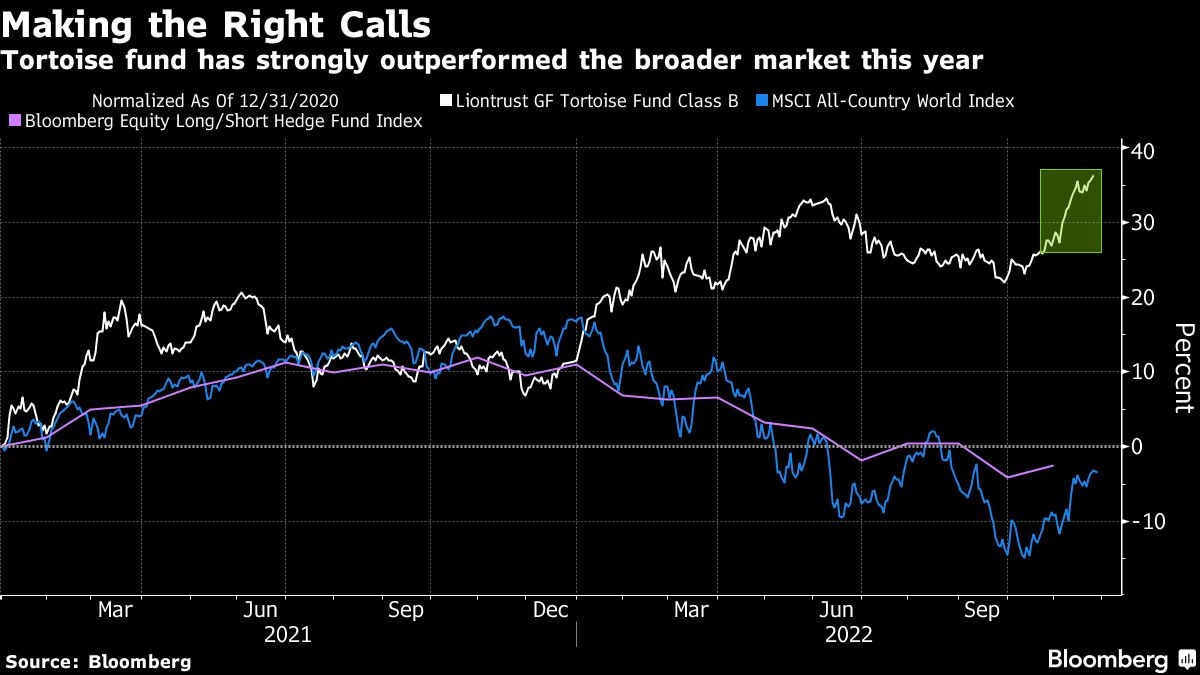 Big deratings have left some names “basically in the doghouse,” trading at multiples of 10 to 11 times earnings, levels unseen for the past five or ten years, he said, in a reference to the ongoing tech rout that has wiped trillions of dollars off the value of the vaunted sector.

That's the case with Meta, in which Tortoise took a long position last month. Following a hefty price plunge -- almost 70 per cent year-to-date -- Meta trades at about 11 times 2023 earnings, half the price-to-earnings levels seen a year ago, Bloomberg data show.

Meta and its tech peers have failed to really benefit from recent signs that central banks may slow their rate-hiking pace, but Morris said the company's high net cash position, growing user numbers and cost-cutting possibilities made it a good buy for the longer-term.

His other long tech positions include IBM Corp., alongside chipmakers Micron Technology Inc. and Intel Corp., according to filings from end-October. The fund also recently closed short positions in two other semiconductor firms Nvidia Corp. and Advanced Micro Devices Inc., as well as crypto exchange Coinbase Global Inc., trades that Morris said had “worked out well.”

The fund's outperformance this year contrasts starkly with the bulk of long-short equity hedge funds, with many sitting on losses and facing client outflows.

Morris attributes his successful run to a relatively simple strategy. The fund holds about 60 positions in total, and unlike many hedge fund peers, it does not have high leverage and avoids illiquid positions.

Morris sees opportunities for additional long positions even though the MSCI All-Country World index has recouped some losses of late, with gains of about 13 per cent this quarter.

The fund retains positions in energy, another flagship value industry that is this year's best-performing equity subgroup. Holdings include TotalEnergies SE and Shell Plc. In addition, Tortoise has exposure to European banking shares.