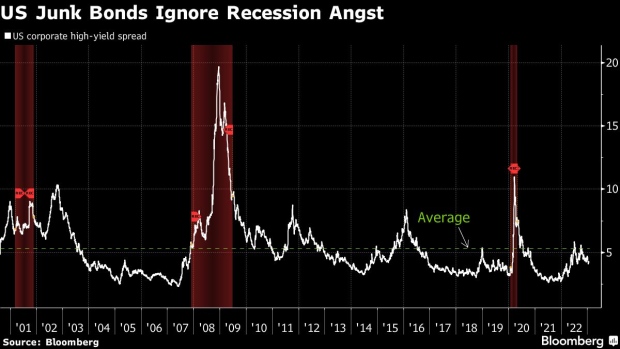 (Bloomberg) -- Investors in US stocks and junk bonds are failing to price in enough risk of recession this year, according to an Asia-focused hedge fund that outperformed the global industry in 2022 with well-timed bets on China’s rebound.

The S&P 500 and high-yield corporate debt don’t account for “the tightening cycle and the chance of recession going up,” making them vulnerable to another selloff, according to Nicholas Ferres, chief investment officer for Vantage Point Asset Management in Singapore.

He cautioned that too many investors appear to be focused on backward-looking economic statistics, like US employment, instead of gauges that point to future demand, such as new orders for manufacturers.

“Because the coincidental data is ok, people have a false sense of security,” said Ferres, whose firm has $650 million under management. A monthly measure of new manufacturing orders for the US has been sliding for two years and in contraction since September. A similar gauge for Europe has registered contraction for six months.

Predictions of a drop in riskier assets in the first half of this year, followed by a rebound in the second half, may turn out to be back-to-front, according to Ferres. The S&P 500 has climbed about 12% from its lows in October while the yield spread between junk bonds and their Treasury equivalents is narrower than the average of the past two decades. Ferres suggests the gap should be widening.

Ferres isn’t alone in his caution. BlackRock Investment Institute strategists have said the rally in stocks this year makes markets “vulnerable to negative surprises - and unprepared for recession.”

Macro strategists at BNP Paribas SA said in a note on Sunday that hopes for a soft landing would dissipate, just as the idea of transitory inflation did a year ago.

Vantage Point turned a small profit in 2022, helped by bets on Chinese tech stocks and positioning for the nation’s wind-back of Covid Zero. Preqin data show similar returns for Asia-based global macro funds while the wider hedge fund industry experienced an average loss of more than 7%.

The fund held around a third of its assets in large-platform companies including Alibaba Group Holding Ltd., Tencent Holdings Ltd. and JD.com Inc., which rallied sharply from October. The fund sold into the rally and now has about 10% of its portfolio in Chinese tech companies.

Other bets linked to the Chinese economy include stakes in miners BHP Group Ltd., Rio Tinto Ltd. and Fortescue Metals Group Ltd., as well as an Asian high-yield credit index that presently makes up 10% of the fund. The index has rallied more than 35% from a low in early November as China has relaxed its pandemic protocols.

Vantage also has a large short position in Australian consumer discretionary stocks, which Ferres expects will decline as home owners spend less so they can meet rising loan repayments, and as the economy slows.

The fund holds 10% to 15% of its assets in cash and none in fixed income given the under-performance in the bond market last year and the potential for tighter monetary policy. “That was an important decision because fixed income as a defensive asset class didn’t work,” Ferres said.

Instead, credit default swaps now offer a safer form of protection in the medium term. As economic signals weaken, the price of protection against corporate debt defaults will increase, offering gains for investors that load up on CDS indexes, he said.

(Adds views from BlackRock and BNP below chart.)