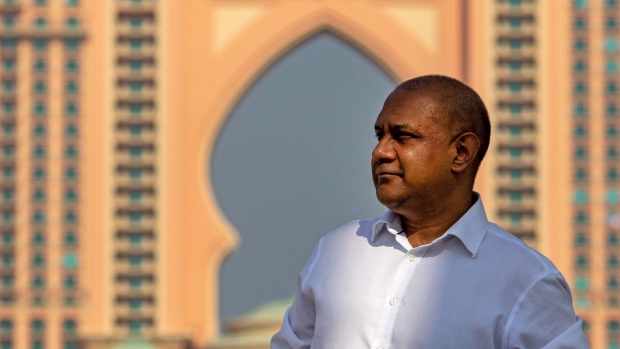 Sanjay Shah, chief executive officer of Elysium Global Ltd., poses for a photograph in front of the Atlantis Hotel on the Palm Jumeriah in Dubai, United Arab Emirates, on Tuesday, Sept. 29, 2020. Shah charted a spectacular rise from trading-floor obscurity to amassing as much as $700 million and a property portfolio that stretched from Regent’s Park in his native London to Dubai. , Bloomberg

A case against Shah, who is currently locked up in a Dubai jail, and six others can go to trial, a spokesman for the Hamburg Regional Court said Thursday, without giving further details. Sueddeutsche Zeitung reported the ruling earlier.

Shah is charged with 55 counts of money laundering linked to the Cum-Ex probe in Denmark, where he already faces criminal charges, and to a related case in Belgium. Danish tax officials describe Shah as the key player in a fraud tied to the controversial Cum-Ex strategy where traders took advantage of legal loopholes to obtain duplicate dividend tax rebates.

Shah was arrested in Dubai, where he lives, at the request of Denmark, but the nation recently lost a court bid to have him extradited. The Nordic county has said it intends to appeal that ruling.

A spokesman for Shah said his client remains locked up in a Dubai jail, allowing only sporadic contacts. Shah, a British national, has always maintained his innocence.

The Hamburg indictment focuses on laundering profits from allegedly filing tax-refund claims with untrue statements in Denmark and Belgium. In recent days, another court in Koblenz in a related case took the opposite view and didn’t allow money laundering charges against five bankers to proceed as the alleged tax crimes didn’t take place in Germany.

The Hamburg judges didn’t even explain why they ruled this way, said Bjoern Gercke, Shah’s German attorney, calling the lack of any written grounds  “incomprehensible” in the light of the fact that the Koblenz tribunal took the opposite view.

Given that Shah is out of reach of German authorities, it’s unlikely that the Hamburg case against him will take place any time soon. Germany requires that defendants are present in criminal trials. None of the other accused listed in the indictment has a German address. A UK court recently allowed one of them to be extradited to Denmark.

(Updates with Shah’s lawyer in the seventh paragraph)