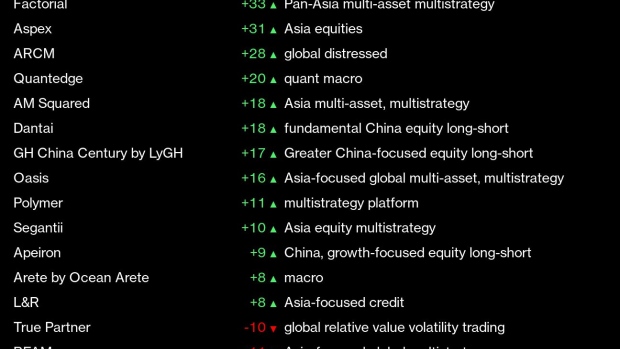 Pedestrians walk along the Bund past buildings in the Lujiazui Financial District at sunrise in Shanghai, China, on Tuesday, Jan. 4, 2022. A wall of maturing debt and a surge in seasonal demand for cash will test China’s financial markets this month, putting pressure on the central bank to ensure sufficient liquidity. Photographer: Qilai Shen/Bloomberg , Bloomberg

(Bloomberg) -- One of the wildest runs for Asian markets in recent memory helped drive the gap between the region’s hedge fund winners and losers to new extremes.

“I don’t think I’ve seen such high dispersion in Asia equity long-short hedge funds really as long as the market effectively existed,” said Richard Johnston, Asia head of Albourne Partners, which advises clients on alternative investments. Factors swaying performance included how funds positioned themselves on Chinese education stocks and Internet companies, and how much exposure they had to better-performing markets like yuan-denominated shares, Japan and India, he added, declining to comment on individual funds.

Chinese regulatory tightening ensnared industries ranging from e-commerce and after-school tutoring to ride-hailing, sending two gauges of Hong Kong-listed stocks to the biggest declines among 92 major stock indexes tracked by Bloomberg globally. The sell-off of growth stocks and financial woes among Chinese high-yield bond issuers also inflicted pain on funds. Meanwhile, funds that pursued multiple strategies and made well-timed wagers on the global energy transition were among the winners.

The Eurekahedge Asian Hedge Fund Index advanced 5.7%, trailing global peers by 3.6 percentage points after outperforming in seven of the past 10 years. Below is a selection of returns from some of the region’s notable funds:

Sylebra Capital’s older global hedge fund dropped 35% in 2021, according to a person with knowledge of the matter. The stock picker was hurt by its bias toward technology, mid-cap stocks, deep fundamental research and a large book of bearish wagers, the person said. Investors shifted to cyclical and mega-cap stocks, markets were driven by macroeconomic headlines, and retail traders derailed hedge fund short-selling, the person added.

The loss almost wiped out the fund’s 48% gain in 2020. It represented a setback for the firm that raised about $900 million from investors in 2021 looking to profit from a wider performance gaps of stocks.

A December gain helped the Greater China-focused Brilliant Partners Fund narrow its full-year loss to 23.6%, according to three people with knowledge of the matter. Brilliance Asset Management founder Shi Lin apologized to investors in July for misjudging the impact of Beijing’s reforms of the after-school tutoring sector.

CloudAlpha Master Fund ended a volatile year down 24%, after losing 25% in December, according to an update sent to investors. Kintor Pharmaceutical Ltd., one of its core positions, dived 78% in Hong Kong that month, after announcing its Covid-19 drug failed to meet certain “statistical criteria” in the phase III trial for efficacy and safety. The hedge fund is Kintor’s largest outside shareholder. CloudAlpha, which can invest in technology companies globally, soared 137% in 2020 and took a positive spin on last year’s results.

“Looking back, we made a lot of right decisions in 2021,” the firm wrote in an email to investors sent by Crystal Lu, its chief communications officer. The most meaningful change was the shift from software and Internet stocks to companies with real technology edges in the U.S. and China mid-last year, seizing on China’s push toward technology self-sufficiency. “The biggest lesson learned was sizing on the binary biotech names,” it said.

It’s not all doom and gloom. Och-Ziff Capital Management alumnus Hermes Li’s Aspex surged at least 31% for the year, said two people with knowledge of the matter. Aspex’s assets have mushroomed to about $8 billion, the people said.

The latest global distressed asset fund of Alp Ercil’s Hong Kong-based ARCM gained 28% in 2021, said a person with knowledge of the matter. Paying off was the timely rotation out of 2020’s winning credit positions, in favor of distressed equities related to cyclical industries and commodities, according to the person. The move was intended to capture investment opportunities in areas such as base metals, energy and industrial stocks amid the global transition toward cleaner energy, the person added.

Grace Lu’s GH China Century Master Fund was up 17% for the year, according to a newsletter. It thrived on environment-friendly investments such as rare earths and battery makers that supply to the electric vehicle industry, as well as solar power companies and inverter manufacturers, Lu said.

Tribeca Global Natural Resources Fund jumped 58%, said Ben Cleary, its Asia chief executive officer. The returns were largely driven by investments in carbon credits and other beneficiaries of global decarbonization policies such as battery feedstocks, cell makers and clean energy such as uranium, he said.

Managers that focus elsewhere in Asia did well. Seth Fischer led his Oasis Management Co. hedge fund to a nearly 16% surge, said people with knowledge of its performance. The firm benefited from strong results in Japan, where it has made a name for pushing for corporate governance improvements. Starting the year without owning Chinese credit also helped, said one of the people.

While some global macro hedge funds stumbled amid unexpected rate market moves, two such managers in Asia finished the year on a high note. Quantedge’s $3.1 billion quantitative fund rose nearly 20%, according to a newsletter to investors and CEO Suhaimi Zainul-Abidin.

The macro hedge fund of Will Li’s $2.5 billion Ocean Arete Ltd. finished 2021 up 8.4%, the 10th straight year in the black, according to a newsletter. It made money with timely investments that captured the moves in equity index futures and rates markets, said a person familiar with the fund.

In a male-dominated industry, two other women-led hedge funds ended the year with notable gains. Yao Wanyi steered her $650 million Apeiron Capital hedge fund to a nearly 9% return, after trades on global health-care companies with China drivers paid off. L&R Capital Ltd.’s credit hedge fund rose 8%, people familiar with the fund said. The turmoil in China’s real estate industry led to a broader Asia bond sell-off and created short-term opportunities for the active trader led by Li Ran, one of the people said.