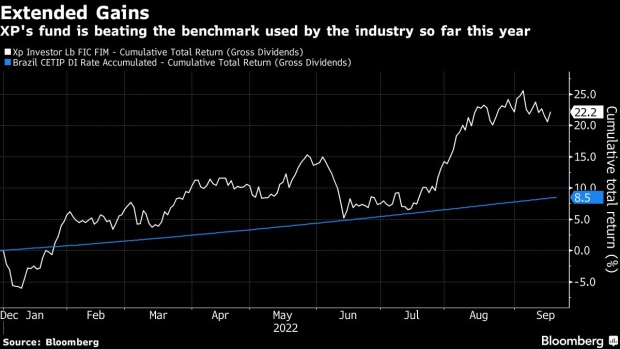 (Bloomberg) -- The Brazilian hedge-fund managers who posted the biggest profits during the country’s last presidential election are piling into shares of utility companies ahead of this year’s vote.

Marcos Peixoto and Joao Braga say domestic stocks look ripe for gains on the back of stable or declining interest rates, better-than-forecast economic growth and historically low valuations. They think utilities are particularly attractive. And their wagers don’t depend on who wins the election; no matter the next president, they believe Brazilian markets could rally as soon as a winner is announced and provides more details on economic plans.

Peixoto and Braga were co-managers of XP Asset Management’s XP Long Biased fund during the 2018 election, when their hedge fund led advances in the weeks surrounding the ballot. Peixoto is still with XP, while Braga has since left to set up his own shop -- a move that many of his counterparts followed during the brief period the nation had record-low rates.

In separate interviews, the investors pointed to the Ibovespa index’s valuation, which sits 42% below its 10-year historical average based on its price relative to estimated earnings. Much of that discount is tied to uncertainty about what the election will bring. But despite the differences between the incumbent Jair Bolsonaro and his challenger, the leftist former President Luiz Inacio Lula da Silva, stocks are poised for gains either way, both men said.

“The victory speech could be the main trigger for Brazilian stocks -- no matter who wins,” Peixoto said in an interview from Rio de Janeiro.

Utilities are currently the largest bet at the XP Long Biased fund because of their ability to withstand economic volatility and what Peixoto calls “extremely discounted” valuations. Some names sell at an attractive internal rate of return --  a metric used in the industry to estimate profitability of investments  -- of above 10%, Peixoto says.

Back in 2018, the equity-focused hedge fund topped all its peers between Aug. 15 and Oct. 30 thanks to derivative bets that would profit if the first round of voting produced a clear favorite. Bolsonaro took a commanding lead and sent Brazilian assets soaring in the weeks that followed.

Current options pricing means that trade wouldn’t work this time around. The latest Genial/Quaest poll showed Lula leading 44% to 34% in the first round vote Oct. 2, then going on to win outright in the second round Oct. 30.

Braga, who’s now at Encore Asset Management, a firm he founded amid the pandemic, has put together bets in power companies like Equatorial Energisa SA, Energisa SA, Auren Energia SA and Centrais Eletricas Brasileiras SA, which was privatized earlier this year.

“We’re bullish, but there’s no need for hunting for riskier bets when you’ve got high-quality names trading this cheap,” Braga said. “There’s no need to play the hero.”